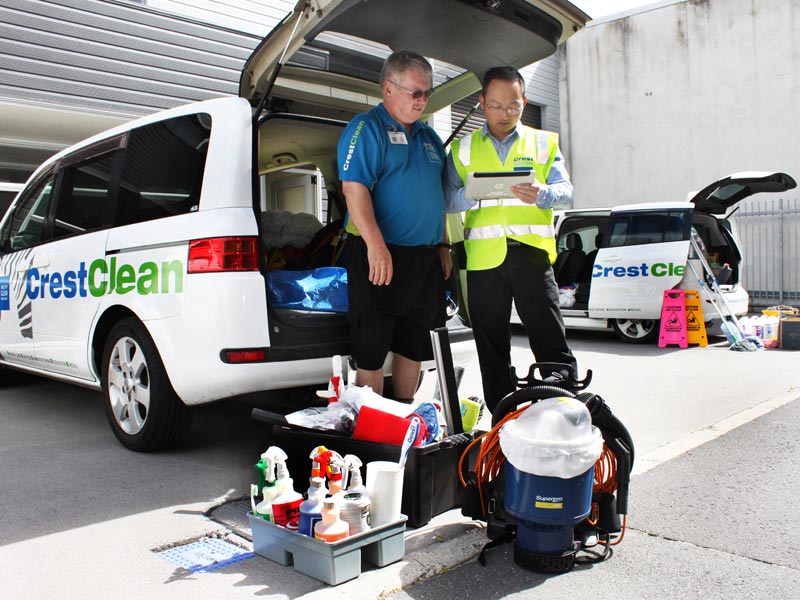 Richard was among the Crest franchisees who attended a regular audit as part of Crest’s regular checks of vehicles and cleaning equipment.

The former business banking manager takes pride and satisfaction in his work and got the seal of approval when he met Jason Cheng, Crest’s Waikato/Bay of Plenty Quality Assurance Co-ordinator.

Franchisees’ vehicles are audited regularly to ensure they meet compliance guidelines as part of the company’s Safety and Environmental Management System. Equipment is also checked to ensure it is clean and correctly stored.

CrestClean’s Tauranga Regional Manager Jan Lichtwark said the audit is extensive in its range of items and checks that came under scrutiny.
The audits helped ensure a high standard of cleanliness is maintained, he added.

“All electrical items are checked to make sure they have been tested and tagged.

“Cleaning equipment is inspected and vehicles are checked to make sure they have a current Warrant of Fitness and Vehicle Registration. We also like to see that vehicles are clean and tidy.”

Richard, 58, has been with Crest for nearly three years after quitting his senior job with a major bank. He had done his homework and was confident joining Crest was the right move.

A Business Banking Manager for an ANZ branch in Hamilton, Richard had a number of Crest franchisees as his clients. And the more he heard about Crest the more he liked, he said.

His bank job had become stressful and was giving him sleepless nights. He decided to look at working for himself and he soon realised that his clients who had a Crest franchise were a happy bunch.

“I had had enough of the stress and worry and it was like hitting my head against a brick wall. I decided I wanted to work for myself.”

When he looked at what type of business to go into, Crest ticked all the right boxes, he said.

“At the bank my clients had all sorts of different businesses. I looked at some of my clients with franchises and I found that Crest was the best as it seemed to offer the most for people.

“Through working at the bank with clients I knew everything about how Crest worked. Crest was the obvious choice for me,” he added.

Richard now lives in Tauranga. He enjoys the flexibility of being his own boss and says he likes working with his customers and the satisfaction gained from doing a good job. He operates cleaning contracts with a school and three doctors’ surgeries.

He likes the fact that Crest maintains high standards, which he said was good for his customers to know their cleaning was in safe and professional hands.

Jason was pleased at the quality he’d seen at the Tauranga audit.

“It was a 100 percent pass rate this year, so that was really pleasing,” he said.

“This year there were some new vehicles that had been purchased by our franchisees. It was good to see people taking care of their equipment and maintain the high standards we expect.”