Live the Life You Want to Live 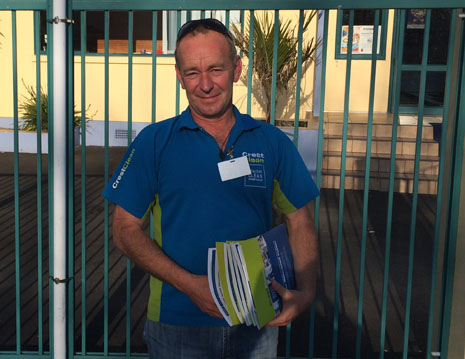 Brian Moffatt knows what starting and running a business is all about – he’s done it before.

He spent years as his own boss, selling audio and video conferencing equipment. He also did a six year stint in the Royal New Zealand Air Force, six years traveling throughout Asia as Asset, Procurement and Distribution Manager for Reuters NZ, six years as a Purchasing and Materials Manager for Telecom, and many other jobs before deciding he was ready to be his own boss again.

Which is what brought him to CrestClean.

“I had a fabulous job and I loved the people I worked with, but I just wanted to do something different. I wanted to be my own boss again.” He sold his farm in Carterton and relocated to Kerikeri, where he began scouting around for his next venture.

“I was looking for businesses and I had a look at quite a few, but they didn’t financially stack up.” When he came across CrestClean, he says, “It’s not so much that the income is guaranteed, but that a lot of the heartache is taken away. That’s the lovely thing about CrestClean and it makes the operation of the business very easy. The bookkeeping is taken care of, the managing of the accounts is taken care of, so if you want to just clean everything else is taken care of. There’s very little heartache being a franchisee.”

And doing the cleaning work is as much about providing customer service as anything else. Something that his Regional Director, Neil Kumar, says has struck Brian as very true: “It’s helping businesses present their business to other customers. You’re part of their team.”

Brian started as a franchisee in July, purchasing a smaller sized business, but that’s grown quickly as he’s received a great reception in Kerikeri. “Crest has a very good name, especially up here, so it’s just easy to do good business. There’s a lot of potential here, so it’s been a breeze to get in as a small business and start from scratch. My business has now grown to a full time venture. It’s going really well and it couldn’t be easier.”

He recently purchased a large carpet cleaning machine, which he says will have paid for itself by January, and he’s also just completed the Hard Floor Care Training Course, which prepares franchisees for that specialist service.

In spite of the doubling of his business and the addition of new specialist skills, he still has time to go fishing and tend his garden of gladiolas and roses.

Brian’s partner, Cheryl, a retired registered nurse, is helping him run the business, which means he gets more time with his sweetheart. “We can go work together, have a glass of wine after on the deck, and get up in the morning and go fishing,” he says. “I’m living the life I want to live.”