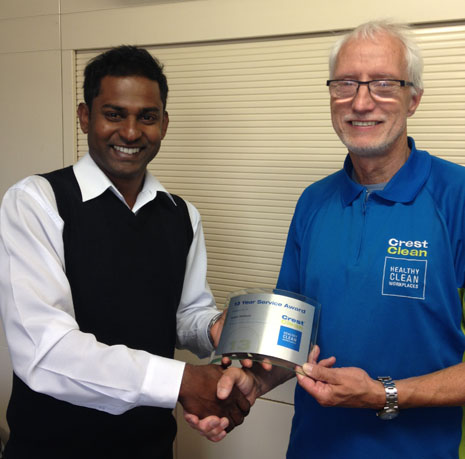 Grant Holland, one of the longest serving Christchurch — and CrestClean — franchisees, with Regional Director Yasa Panagoda.

Grant Holland is one of the longest serving franchisees on the CrestClean team.

“When I started there were only four in Christchurch,” he recalls.

Not all of them are still in business, but the flexibility and income from owning a CrestClean franchise are what keep Grant happy with the decision he made so many years ago.

“I was working in retail, as a salesperson at Hallensteins. My wife and I were looking for something with more flexible hours,” says Grant. “Crest appealed to me because it’s reasonably affordable to get into and there’s no overhead like having a retail place where you might have rent but if you don’t have customers come in, you won’t be able to pay it.

Over the years Grant grew his business quite a lot and at one time had up to seven staff assisting him, but more recently he’s scaled back in order to spend more time with his four children. Many of his contracts are at schools, which he likes because he has the same holidays as his kids.

Asked if he had any memorable moments, and a night at Mt Pleasant School immediately comes to mind.

“When I arrived the alarms were all going so I had a look around. I found a fish on the floor, still alive. Somehow it had come out of the fish tank in one of the classrooms. It was really bizarre. We couldn’t figure out what had happened but it turned out there was a cat locked inside the school. They found it the next day, which explained why the alarms had been going off all the time.”

Grant’s advice to anyone new to Crest is: “Not to worry too much about the time. When we first started we were looking at the clock all the time. It’s better just to do a good job and not stress about how much time it takes.”