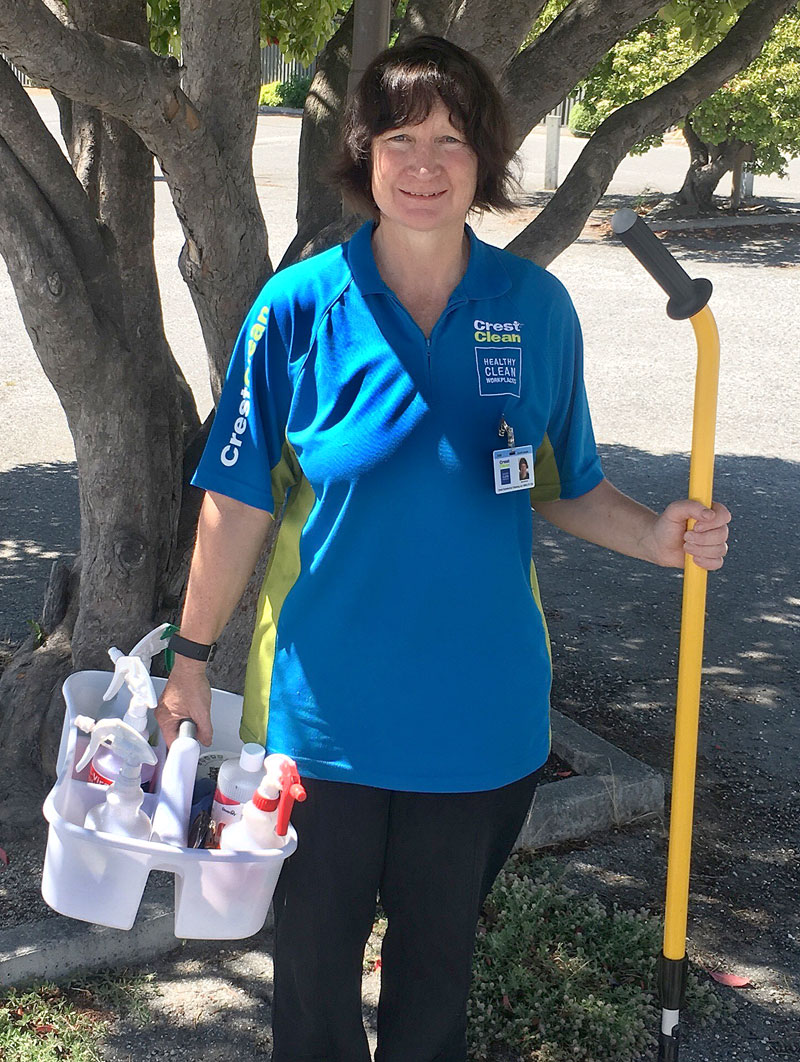 Bernie Brown loves running her own cleaning business in Alexandra.

Flexible working hours and being her own boss ticked all the boxes for Bernie Brown when she found her perfect job in Central Otago.

Bernie purchased a small CrestClean franchise in Alexandra where she lives – but just three months on and she’s already looking at expanding her business.

Before she worked for herself, Bernie was the cleaner at Alexandra’s St Gerard’s School. She loves having her own cleaning business and being a local has some advantages, she says. When James took her to meet the customers there were many familiar faces.

“He would take me around to the businesses that I was going to be cleaning for and I pretty much knew all of them!

“I’ve lived here for quite a while. It gave me a bit of a head start for my business.”

Bernie enjoys the work and the relationships with her customers – and she takes pride in her work.

“I get a lot of satisfaction when I look back and see that I’ve done a good job, knowing it has been done to the highest standards for the customer.

“It’s all about having a good reputation. It feels really great to get good feedback from the customers.”

And maintaining those customer relationships extends to delivering a Christmas card to each one.

“They really appreciate that because it’s really quite personal. Some customers I don’t get a chance to see so I’ll leave a card on their desk and I’ll meet up with them later on.”

James has been impressed with Bernie’s commitment to her business. “She’s easy going and a very hard worker,” he says.

He was delighted to be able to accommodate Bernie’s preference for the days and hours she works. “We were able to tailor a franchise for her that has her working on certain days. She has a family and she effectively works on three days each week.”

Alexandra is one of the areas being promoted under CrestClean’s Move to the Regions Programme. The programme provides people who would like to own their own business with an opportunity to move outside New Zealand’s major cities.

The incentive has proved popular. CrestClean has successfully relocated more than 50 families and couples to many provincial towns – including Cromwell, Alexandra, Queenstown and Wanaka – where each family has a busy CrestClean business.

Under the programme, CrestClean gives new franchisees a helping hand. It includes assistance in finding a rental property; the bond is fully paid; rent is covered for first six weeks.

“It offers the perfect balance of a successful career and enviable lifestyle. Financial earnings are the same or better than the big cities, while costs are often less due to reduced travel time and lower living costs.”

Bernie says Alexandra is a great place to live and is perfect for families and those who enjoy the great outdoors.

“It’s an expanding town and there are a lot of new subdivisions. It’s a really good place to raise children. There are three schools in Alexandra and they are all very good.

“You can’t go wrong with choosing a school. Two of the schools are quite small so the class sizes are small, which is a big plus.”

Bernie is actively involved in the local community. She’s an outward bound enthusiast and a Kea Scout leader.

She loves living in Alexandra and enjoys the Central Otago climate. “We have four distinct seasons here. It’s really good and people love the weather in Alexandra. The long summer evenings means you can enjoy great summer days.”

She now has her sights set on completing a half marathon at the Run the Vines event in February at the scenic McArthur Ridge Vineyard in Central Otago. Participants will run through the vines and around the vineyard estate.