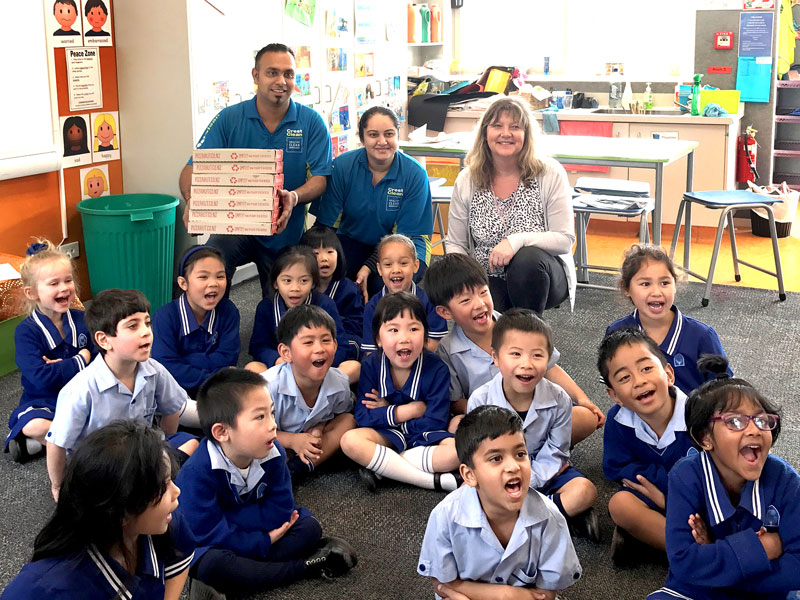 A reward scheme that encourages kids to be tidy at school has been hailed as a game-changer after it was introduced at an Auckland school.

“We enjoy that part of it, it’s great,” say Gina. “It’s a really good incentive as it’s a two way street.

“It encourages our students to take responsibility for the cleanliness of their classrooms and also gives them an understanding that we have cleaners coming in and they can make it easier for them if they look after their classrooms so the cleaners can do a really good job.”

CrestClean has recently taken over the school’s cleaning and the Cleanest Classroom Award went to Room 5 children.

Gina said the youngsters were excited to receive their pizza prize. “The kids actually got to meet the cleaners.

“It was really exciting for them and they could put a face to the people who are looking after their classrooms. They are not magic fairies who come in at night, they are real people.”

A recent term clean of the school has been very thorough, said Gina.

“We were really impressed. We were virtually ice-skating on our floors because they were brilliant.

“Out vinyl areas have never been polished correctly since we opened. We’re a relatively new school, it’s our eighth year.”

She added: “To have those floors sparking like they were eight years ago was wonderful. We saw the glow the minute we walked in.”

Viky Narayan, CrestClean’s South and East Auckland Regional Manager, was not surprised by the feedback. “With our cleaning services, what we say on paper is what gets done for the customer.

“The term clean at the school brought the ‘wow factor’. We’ve just raised the bar with the level of cleaning that they had come to expect.”