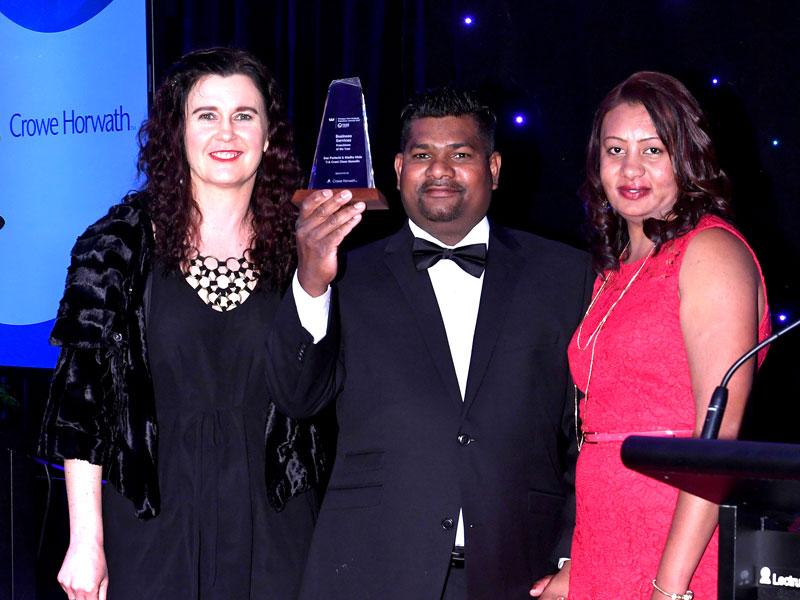 The Dunedin couple are national winners in the Business Services category of the Westpac New Zealand Franchise Awards.

It’s a remarkable achievement for the husband and wife team, who arrived in New Zealand nine years ago with just their suitcases and $200 between them.

The couple, who have increased the turnover of their CrestClean business tenfold and employ six staff members, won high praise from the awards judges. They were commended for their customer focus and the delivery of the services they supply.

Dan says they were stunned and overcome when the winners were announced at a gala awards dinner at Auckland’s Alexandra Park on Saturday.

“We hugged and it was really emotional. It was the best day of our lives.”

CrestClean colleagues at the awards dinner were the first to congratulate Dan and Madhu. Among them were CrestClean’s Dunedin Regional Managers Tony Kramers and his wife Nicky.

“As soon as we came back to our table Tony and Nicky hugged us and said ‘we are so proud of you guys’,” added Dan.

CrestClean Managing Director Grant McLauchlan said Dan and Madhu’s award is inspirational and an endorsement of how the company’s business model is changing lives of franchisees throughout the country.

“Like Dan and Madhu, our people are running very successful businesses and enjoying the personal benefits such as being able to buy their own home, which is a major achievement in itself.

“They have worked with our system to achieve that success. We are very proud of them.”

Dan and Madhu immigrated to New Zealand from Fiji in 2008, but starting a family meant they struggled on a single income. Dan says it got really tough – after rent and paying off a loan, they were left with just $47 dollars a week to live on.

The family moved to Dunedin and Dan got work fitting windscreens. Meanwhile, Madhu looked for a business that offered additional income with flexible working hours. She joined CrestClean in 2013 and Dan joined her the following year after he got made redundant.

He says they worked 24/7 to make ends meet. Their initial hard work paid off and they were able to start looking for a house within 18 months – a previously unimaginable dream.

“We have worked so hard to get where we are today,” added Dan. “It shows that hard work pays off. You just need to believe in yourself.”

The couple were commended by awards judges who said: “CrestClean Dunedin impresses with its challenging target-setting, and reaching those targets by focusing on customers and people.

“Of particular significance for the judges was the way Service Level Agreements are developed with the client and used as the basis for the provision of a consistent level of service which is adhered to by all employees.”

The Westpac New Zealand Franchise Awards are promoted by the Franchise Association of New Zealand. Entry is only open to its members.

The acclaimed awards are recognised as having some of the most rigorous criteria in the world. Entrants go through a comprehensive four-stage process. Evaluations by the New Zealand Business Excellence Foundation are based on the internationally-recognised Malcolm Baldrige criteria, a system that is used by more than 25 countries as a standard for quality awards.