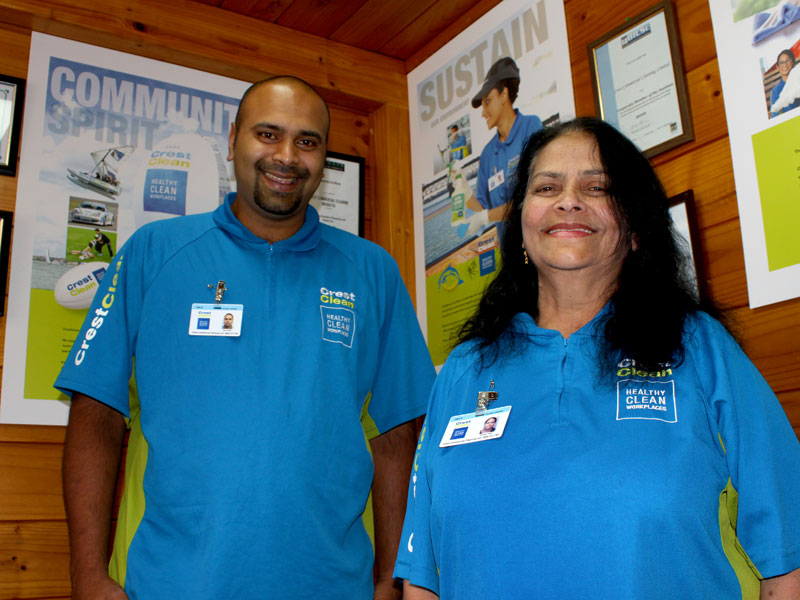 Aaron and Purnima Singh say they work really well together.

A mum and son team who relocated from Auckland have hit the ground running in Hamilton.

Purnima and Aaron Sing have been impressing customers, receiving glowing feedback from a high-profile food producer for their high standards and commitment to providing a top-notch service.

And the enthusiastic pair have been buoyed by the good reports. “We feel proud when we are wearing our uniform because we know that through CrestClean we are doing a very good job,” said Aaron.

“It’s a vocation that we’ve been blessed with,” he added.

Before relocating, Aaron had a CrestClean business in Auckland and the pair worked well together. Aaron, 29, says there are some great benefits to being a family team, particularly working alongside his mum.

“She’s really great and gives me tips on how to make the work easier. It’s all about working smarter and being well organised,” he adds.

Purnima, 63, who was a school teacher in Fiji for 35 years before moving to New Zealand, says cleaning keeps her fit.

And she loves being a business owner. “You are your own boss and you feel good at doing your work well.”

Aaron says he gained a lot from the training provided by CrestClean. “The best thing about Crest is that when they take you on board they train you well.

“They empower you with skills you need to succeed in the profession. It’s awesome and you get a lot of support along the way.”

Purnima and Aaron have recently taken over the cleaning at Open Country Dairy, Waharoa.
The company’s Site Manager, Darren Stone, said the pair had got off to a great start.

“When they arrived on site they spent quite a bit of time doing extra cleaning to bring it up to standard.

“It was good as there were a number of areas that had fallen back over the past few months or so, which was why we were changing the cleaning contract.”

Darren said it was the extra cleaning work that Purnima and Aaron tackled that had been particularly noteworthy.

“They just got in and did extra cleaning around all the windows and the outside of the building and the main office. The areas are looking nice and clean.”

The CrestClean team had been proactive in drawing management to extra things that needed cleaning, he said. It was important a high level of hygiene and cleanliness was maintained at all times throughout the plant, he added.

“We are a food processing business so particularly our plant red lines is a key area for us.

“We need those to be top notch all of the time. We can’t afford for anything to be out of alignment there.”

He said it was important a high level of hygiene and cleanliness was adhered to. “We need that standard maintained the whole time.”

Nothing is too much for the mum and son team, he said. “If I asked them to sort something out they do it pretty quickly.”

Nivitesh Kumar, CrestClean’s Waikato Regional Manager, says Aaron and Purnima have a great attitude and have already increased the size of their business.

“They are a great team, they work really well together and it’s great to get good feedback they are doing a fantastic job.”