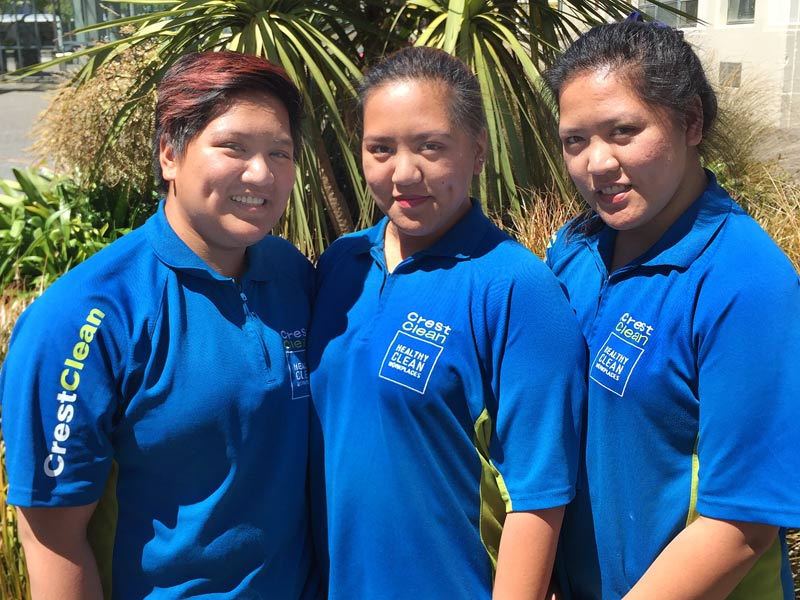 When Marta Manicia needs three extra pairs of hands to help her with the family cleaning business she doesn’t have to look far.

For the Southland CrestClean team is unique as three of its members are triplets, and the young women enjoy nothing better than rolling up their sleeves and doing their bit for mum Marta.

The family partnership is made up of mum Marta, dad Rizalino, eldest daughter Jennifer, 23, and 20-year-old triplets Jing-Jing, Jeliza and Jemariz. The triplets started life being named after the first three letters of the alphabet before their parents decided on what to call them.

And not be left out is youngest daughter Crysty, 11, who has a few years yet to reach the age of 18 when she can join in the family business as well.

The Manicia family arrived in New Zealand eight years ago from the Philippines. Living in the northern district of Manilla, they had a business dealing in school supplies and general merchandising.

But New Zealand came on their radar when they looked to emigrate to a country that would provide better opportunities and was safe place to raise their five children.

Marta said that when the triplets were born in their native homeland she initially called them A, B and C before settling on the names of Jing-Jing, Jeliza and Jemariz.

For Marta and Rizalino it had been a bit of shock to find triplets were on the way, said Marta, although twins run on her husband’s side of the family.

After emigrating to New Zealand, with Rizalino involved in the dairy Industry, the family eventually decided to purchase a Crest franchise to operate as a family business.

The triplets at the time were just finishing secondary school at Aparima College, Riverton. And the following year Jing-Jing, Jeliza and Jemariz returned as part of the family team that was providing cleaning services to the school.

Marta said she had some sympathy for her husband in the female-dominated family.

“He’s outnumbered by females at home and he’s always kept busy with everyone wanting his time!”

The triplets also have day jobs, one working on a farm and the other two as housekeepers at the Rowena Jackson retirement home, Invercargill, where Marta also works.

Marta said her girls are hard workers and she’s delighted to have them involved with CrestClean.

“It’s good having them to help with the business. They enjoy helping me. I’m very proud of them.”

She said Southland was a great place to live. “It’s quiet and a very good place to bring up a family. We really love it here.”

CrestClean’s Invercargill Regional Manager Glenn Cockroft said they were a fantastic team and the whole family worked very well together.

He believed that they were the only triplets that were involved in a CrestClean Franchise in the country.

“They are a lovely family. We have quite a lot of Filipinos in the Invercargill area. They are very supportive of each other.”