Move to the Regions Programme successful 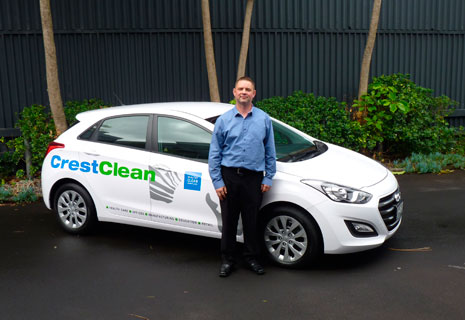 CrestClean National Relocation manager Chris Barker is pleased with how the Move to the Regions programme is going.

CrestClean’s Move to the Regions Programme is providing families with opportunities to settle outside of Auckland and Wellington.

CrestClean, which is one of many companies helping to settle families outside Auckland, has successfully settled 25 families in Hawkes Bay, Whangarei, Wairarapa, Kapiti Coast, North Harbour, Hamilton, Taupo, Nelson, Blenheim, Queenstown, Wanaka, Alexandra and Cromwell in the last four years.

It is a programme that is proving successful, CrestClean National Relocation Manager Chris Barker says.

“It is a win-win. It is vital to the ongoing success and growth of our business – without it we would be unable to grow further in some regions due to the shortage of people.”

The idea behind the programme, which started in 2011, is to find “good people” who would like to own their own business but are unable to for a variety of reasons.

“This could be due to long waiting lists for businesses in their current location or insufficient funds to purchase in their location of choice,” he says.

As part of the programme, which utilises resources (good people) wisely by relocating them to where they are needed, franchisees are also given $2000 toward relocation costs.

“The reason why we consider this to be a win-win is that we get good operators in the location that we need them in. The $2000 gives families a helping hand. It helps take the pressure off moving,” he says.

Chris says smaller regions provide franchisees and their families with a great lifestyle that is full of opportunities.

“The schools are smaller and they are very welcoming to new pupils. There are no zoning issues so people have more choice,” he says.

Further education opportunities include tertiary providers. Sport is another advantage with great local teams and a friendly environment.

To buy or rent a house in the regions, prices are considerably less compared to Auckland. This is a significant benefit to franchisees as the move allows them to purchase their own home.

“Cheaper house prices make a huge difference. Most of our franchisees purchase their own home,” he says.

If you would like to discuss CrestClean’s Move to the Regions Programme contact CrestClean National Relocation Manager Damon Johnson, 027 426 2213 or email: damon@crestclean.co.nz.