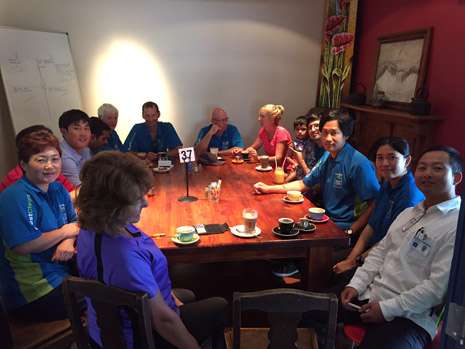 Tauranga franchisees and Jason Cheng, right, having coffee and a chat about CrestClean.

As CrestClean continues to grow, new people are joining the business at all the times, in all the regions.

Jason Cheng recently moved from Auckland to Hamilton to take on the role of Quality Assurance Co-ordinator for Waikato and Bay of Plenty. Jason is one of several company officers throughout the CrestClean organisation whose role is to work with franchisees conducting audits and liaise with customers to ensure exemplary service is being provided.

He’s been three weeks on the job and Tauranga Regional Manager Jan Lichtwark organised a special gathering for coffee in order to make sure all of his franchisees had a chance to really get to know their new team member.

The gathering was over coffee at Grindz Café and 18 franchisees – about half of Jan’s team – were able to attend. He’s already scheduled another coffee for next week for everyone who couldn’t make it.

“Jason said it was good for him to put names to faces, especially because he’s conducting audits of their work and they aren’t usually on site when he’s doing the audits,” notes Jan. “That’s because he does audits during the day and many of them clean at night.”

“And it’s good for franchisees to get to know him so they feel more comfortable ringing him up with questions or clarifications about their audit results,” he adds. “I think this will lead to an even stronger team here in Tauranga and we’ll be able to stay on top of giving the best customer service we can.”