‘Move to the Regions’ Success Moves up to Crest Regional Manager 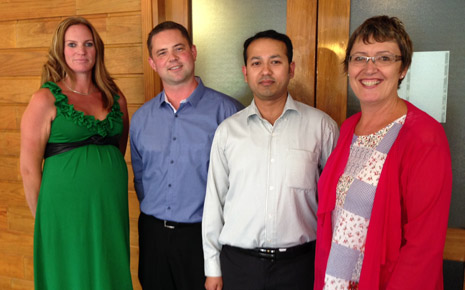 Prasun Acharya has been on the move ever since he joined CrestClean in 2013, in part due to CrestClean’s special “Move to the Regions” offer, which took him from renting in Auckland to living in Napier. He’s now moving to New Plymouth and moving on from being a Crest franchisee to leading Crest’s newest region, Taranaki.

Becoming Regional Manager of Taranaki is not where Prasun expected to find himself, just two years after making the initial inquiry into owning a Crest franchise.

“I was living in Auckland, selling ventilation systems and my wife, Diksha, was the one who actually wanted to buy the franchise. She wanted to do something of her own. We started visiting different cleaning companies, but clearly Crest stood out from the rest,” he recalls.

He contacted Caroline Wedding, Regional Manager for North Shore and West Auckland. “After the first meeting, I knew he would be a good fit, but it was a matter of finding where and at the time Crest really needed more great people in Hawkes Bay,” says Caroline.

She put him in touch with Chris Barker, CrestClean’s National Sales Manager. “We discussed options,” recalls Chris. “To stay in Auckland? Relocate? Sometimes it’s a matter of identifying what your real goals are and then discovering that there’s an opportunity available that could help you to make them happen.”

Prasun says he’s “absolutely pleased” with how that opportunity to relocate, which includes a $2,000 relocation payment from Crest, has become a new opportunity to be Regional Manager of Taranaki. This is the 26th region in Crest’s national network of franchisees.

“We were just renting in Auckland and getting our own house was out of reach,” he says. Now he and his wife and daughter are settling into a new home in New Plymouth while he pursues this new role.

Prasun has a background in accounting and sales and marketing, and worked at ANZ Bank while operating the Hawkes Bay Crest franchise with his wife. Abby Latu, Hawkes Bay Regional Manager, says his experience as a franchisee and his professionalism and excellent business management made him easy to recommend for the Regional Manager role when the growth in customers necessitated the establishment of the Taranaki region.

“I’m helping him get used to this new role and showing him some of the things that have worked for me as I’ve grown the business in Hawkes Bay,” says Abby.

“It’s a challenge starting from scratch, but every challenge is an opportunity,” Prasun adds. “I’m quite excited about it. Already there has been some interest in buying franchises.”

Originally from Nepal, Prasun has a love of travelling and came to New Zealand as an international student, finishing AUT with a Masters Degree in Accounting. Diksha is also from Nepal and they have a four year old daughter, Sayjal.

Prasun says becoming Regional Manager is a defining role for him. “Every day is different and it involves helping and educating our clients how Crest can add value in their business. I love to help people around me because I feel it brings positive changes in my life and the lives of my family.”

“Helping my customers to achieve what they want by being proactive and taking extra steps to ensure that they are happy is how I run my business,” he adds. “I firmly believe in customer satisfaction and always go to great lengths to make my customers feel important. My motto is simple — ‘business cannot grow without an extraordinary level of service.'”