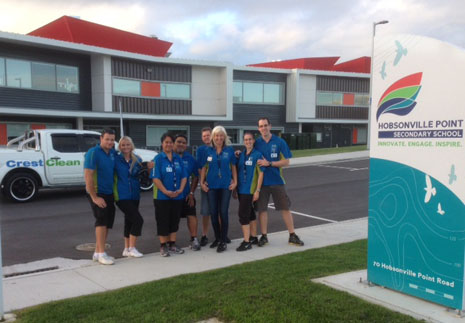 “At any given time, when someone walks into the schools they have to look pristine,” says Alison.

Fortunately, there are four CrestClean husband and wife teams to help her keep the schools looking sharp, which is especially important as all eyes have been on this high profile project. The Hobsonville Point primary and secondary schools are the result of the first public-private partnership established to construct and maintain a school in New Zealand.

“There is a lot of interest from the teaching sector and many tours are conducted throughout the schools on a weekly basis. Crest helps enormously with their high standard of cleaning and nothing is ever too much to ask,” says Alison. “For example, a lot of the functions that are held at the schools are often last minute and Tony and Jana, with their flexible approach and willingness to go the extra mile, always meet them.”

That includes functions with special visitors such as Prime Minister John Key, who made a recent appearance.

“It’s a very big job and the cleaning has to be done to a very high standard,” says Jana Jones. She and her husband, Tony, are the schools’ Site Leaders for CrestClean. “It’s not easy, but because I like a clean environment we’re doing very well. We’re there every day, Monday through Friday, and sometimes we clean after special functions, such as last Friday when John Key was there. That went wonderful. Everybody was happy.”

The schools were financed by Learning Infrastructure Partners, built by Hawkins Construction, and Programmed Facility Management are tasked with maintaining them for the next 25 years until the Ministry of Education takes over. The public-private partnership model enables governments to develop infrastructure assets without the up-front initial costs, however if the buildings aren’t maintained, the private sector partner is not paid.

This means Alison has a significant list of Key Performance Indicators that she must meet – many of them to do with cleaning.

“Programmed Facility Management have to hand over the two schools after completion of our 25 year contract with the Ministry of Education in as pristine condition as possible,” she says. “My daily, monthly and quarterly maintenance schedules are set up for that. There is a lot invested as it is the first arrangement like this in the country.”

However, having a team of CrestClean franchisees on site has been exactly what she was looking for.

“When it comes to having hazardous substances in schools the guidelines are strict and risk is minimised by the fact that your products are all non toxic and not kept on site. The fact that CrestClean is run by franchisees who have a sense of ownership, accountability and are very reliable, is reassuring to me.

During the recent school holidays, Alison had an opportunity to show off the schools to the Programmed Facility Management Chief Financial Officer and other company representatives who were visiting from Australia.

“They were very impressed with the standard of cleaning.”

Asked if she would recommend CrestClean, Alison says, “Yes, I would and I just have!”