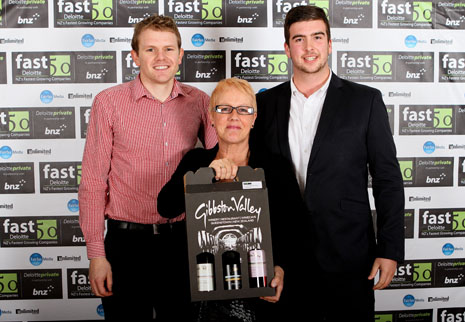 CrestClean has won a Sustained Growth Award from Deloitte Fast 50, an annual index ranking the top 50 businesses in New Zealand according to their revenue growth over the past three years.

It was presented during the Otago and Lower South Island regional award ceremony on 1 October, and accepted by a team from CrestClean’s Admin Services office in Dunedin – Sam Lewis, Wendy Carey and Nick Dunne.

CrestClean has been previously recognised five times in the Deloitte Fast 50, most recently as the ‘Fastest Growing Mature Business – Otago and Lower South Island’ in the 2012 awards.

Deloitte’s Tom Hannagan says CrestClean was selected for this award because of the company’s continued success at a regional level, with criteria for recognition including “continued and sustained growth year-on-year, a strong history with the Fast 50 competition, a strong presence in the local market place (both in terms of Crest’s profile and continued investment in Dunedin), Crest’s international expansion and impressive growth in this year’s competition given Crest’s size.”

“We felt it was important to recognise the fact that Crest has been involved in the Fast 50 since very early on and continues to grow at a very impressive rate, often the winner or runner-up in the mature business category,” said Mr Hannagan.

“Crest is a real hidden gem in terms of Dunedin businesses, and it is pleasing to see how Crest has grown throughout the time it has been involved in the Fast 50.”

Sam Lewis, CrestClean’s National Franchise Manager, accepted the award on behalf of the company and recognised his colleagues, directors and franchisees during his remarks at the awards ceremony. “I’d like to thank all the CrestClean teams, from Whangarei down to Bluff, who are truly the face of our company and out in our communities every day, helping us to be leaders in our industry.”

The Deloitte Fast 50 index and national category winners will be unveiled at the Deloitte Festival of Fast Growth in Auckland on 6 November.