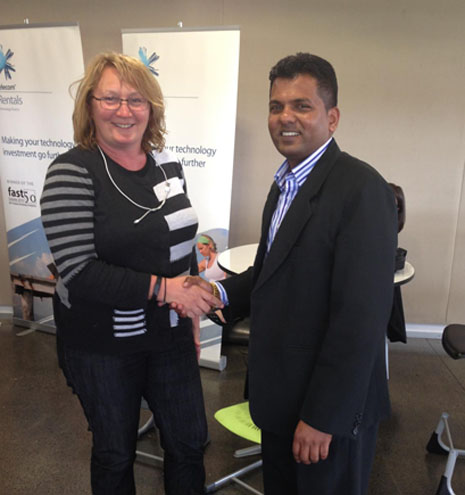 CrestClean’s Viky Narayan congratulates Susannah Fowler, principal of The Gardens School and winner of the draw for a new TV.

Engaging with the local schools in his community is always a great experience for Viky Narayan, CrestClean’s Regional Manager for South and East Auckland.

“I really wanted to give something back to the local school community,” says Viky. “They’ve been very supportive of CrestClean and sharing such positive feedback. The schools we clean couldn’t stop talking about us.”

The Gardens School, a Manurewa primary, was the lucky winner of the TV draw, which had entries from attendees representing more than a dozen schools in the region.

“It was very exciting to take it back to school,” says Gardens School Principal Susannah Fowler. “We have just the place for it.”

Held at Villa Maria, the conference brought together South Auckland principals and their leadership teams for a day of information sharing, exhibitions from local businesses, and guest speakers, including New Zealand Principals’ Federation President Phil Harding, who gave a presentation between morning tea and lunch.

“The conference was a great success for the principals,” says Viky. “We received very positive comments from the five schools we already clean within the Association and there were several requests from other schools that we don’t currently clean.”

At the end of the day, the MPA attendees were also treated to Villa Maria hospitality, courtesy of CrestClean South and East Auckland. Viky says, “It was just a way to say thanks to everybody for such a great day.” 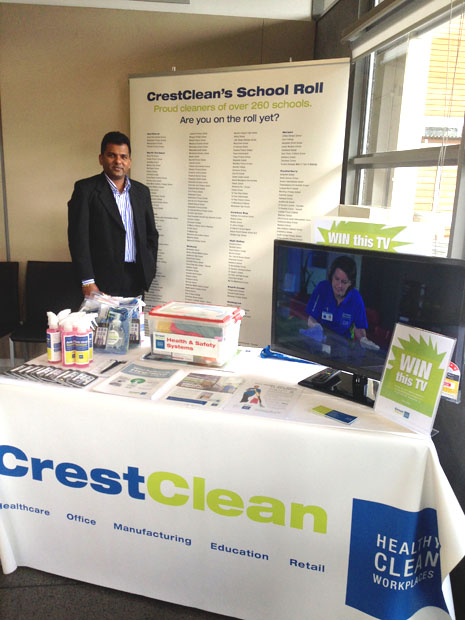 Lots of cool CrestClean products were given away by at the MPA Conference, including a new TV.