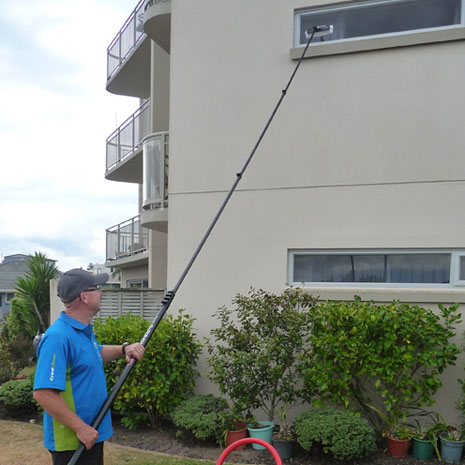 The innovative window cleaning system, which uses carbon fibre water-fed poles and filtered water rather than chemicals and cherrypickers, is faster, cleaner and more economical for customers with buildings up to four storeys.

Tauranga Franchisee Murray Strutton became interested in the system about two years ago as he had a lot of window clients. He started using it at two Metlifecare Retirement Village sites and it was an instant success. After about a year, Jan decided it was time to promote it to some of the other clients in the region.

“I emailed a basic flyer to the top 50 customers. Straight away we had ten jobs. That was more than Murray could handle so we had to stop advertising,” says Jan.

Now another of Jan’s 30 franchisees, Allan Satherley, who joined Crest just over a year ago, has acquired the Pure Water Window Cleaning system and added the innovative method to his range of services.

Jan has since doubled the number of Metlifecare Retirement Villages serviced by Crest and says he almost nervous to approach other retirement communities in the Tauranga region as his two franchisees are already very busy.

Crest also cleans high windows for Zespri International, the ANZ building on Elizabeth Street, Tui Products, and several of the area’s schools. “Pure Water can be used anywhere, at any site that has at least two stories,” says Jan.