Five years polished off as Jason marks milestone with CrestClean 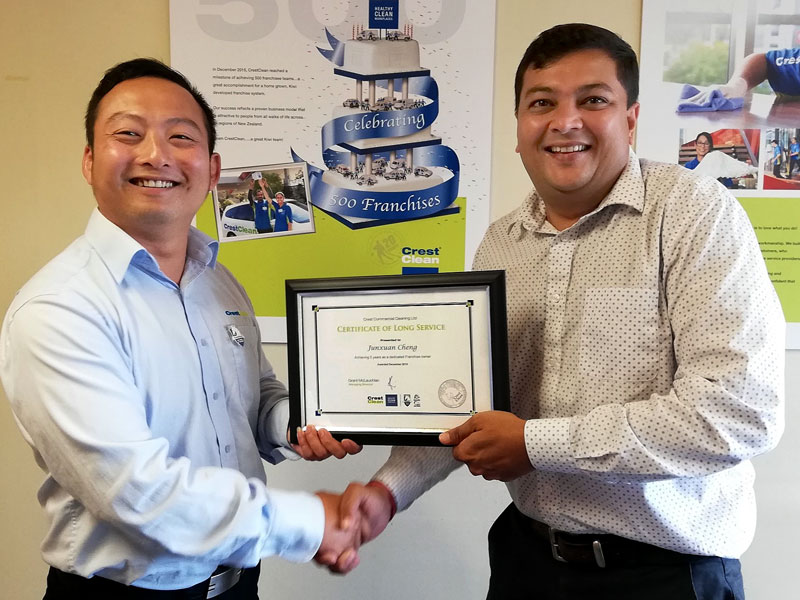 When it comes to first impressions a clean and tidy vehicle goes a long way, says Jason Cheng.

For in his role as one of CrestClean’s quality assurance co-ordinators Jason often bumps into operatives from other cleaning companies – and he’s less than impressed by what he sees and the poor image they portray.

“When I’m out and about I see other companies with dirty vehicles and often their equipment is not very good at all,” he says.

Jason, who has been with CrestClean for five years, says he’s proud to be part of an organisation whose people are highly trained and strive to be the best in the business.

As part of his role, Jason undertakes quality audits, assists with implementing new contracts and is also a guiding force for franchisees new to the cleaning industry.

As well as delivering training modules, which lead to the Certificate in Commercial Cleaning, Jason is now qualified to sign-off franchisees’ competency on completing their final assessment.

He enjoys passing on his knowledge and seeing newbies gain confidence. “It makes me feel really good after I’ve helped someone and you can see them improving and growing their business.”

Jason says he’s seen big changes in his time with CrestClean. He’s a fan of how new technology is being harnessed to revolutionise how some cleaning tasks are carried out.

“There has been a big uptake in people buying battery powered vacuum cleaners. They bring efficiencies in time and energy. I can see the use of more technology in the future. There are exciting times ahead for the commercial cleaning industry.”