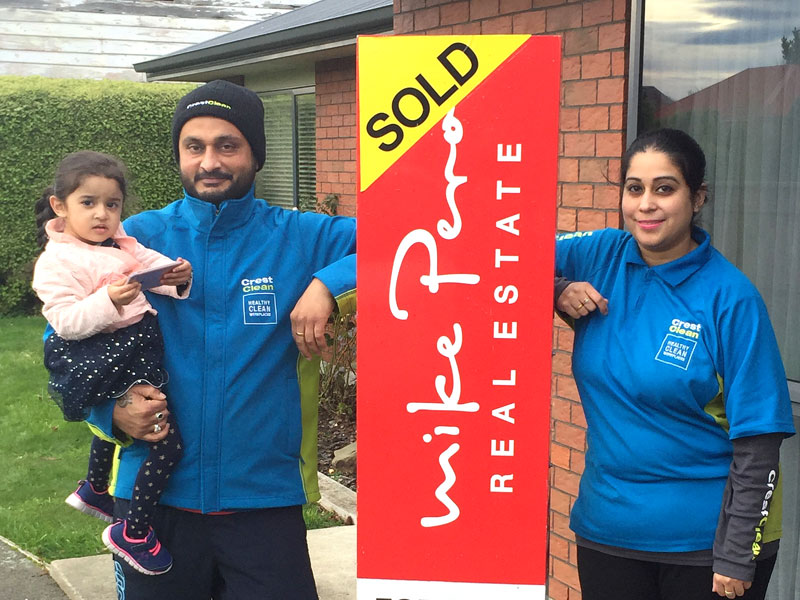 Billy Singh and Sonia Kaur with their daughter Amaira. The couple have just bought their first home.

Their CrestClean business has helped an Invercargill family get a foothold on the housing ladder and secure a place they can finally call home.

It was a big day last month for Billy Singh and Sonia Kaur and their 2-year-old daughter Amaira when they got the keys to the spacious and modern property in the city.

“We had been searching for a house for several months,” says Billy. “Finally we got what we were looking for. It has three bedrooms and is only 10 years old.”

Having a CrestClean business, with the security of a guaranteed regular income, paved the way to securing a mortgage, says Billy. Becoming home owners had been on the cards one day – but the success of their franchise has enabled them to fast-forward their plans.

The couple are originally from Northern India and moved to New Zealand eight years ago. But the decision to leave their homeland for a new life in Invercargill had not been easy.

While they knew they would be leaving behind many friends and family, they could see that New Zealand was a land of opportunity for hard-working people.

Looking back, Billy says it is one of the best decisions that he ever made – the other two great ones were of course asking Sonia to marry him and buying a Crest franchise!

After arriving in New Zealand Billy got work as a farm assistant while Sonia enrolled on a business course at Invercargill’s Southern Institute of Technology.

Billy took farming in his stride, studying hard and gaining a number of industry qualifications along the way. He worked on three different farms in the area, never losing sight of the couple’s goal to become New Zealand Residents and eventually own their own business.

In 2016 they achieved New Zealand Residency in the same year as Sonia gave birth to their daughter Amaira.

Billy’s career took off and he secured a farm manager’s position – but a freak accident while at work left him to ponder if he could carry on in the industry.

He was advised that he should look at a vocation outside of farming as “bouncing around on a tractor seat” was only going to aggravate the injury he’d suffered to his back.

An advert he saw on Trade Me, offering business opportunities with CrestClean in Southland, would be a game changer for Billy.

He was attracted by the chance to work for himself, with the guarantee of receiving a regular income. Although still a physical job, cleaning was easier on the body and the hours were more flexible.

He opted to buy a CrestClean franchise with a small turnover while he carried on at the farm. But he soon saw the potential to expand and he eventually quit farming altogether to concentrate full time on building the business.

Billy and Sonia now get to spend more time together. “You are your own boss and you get to be able to manage your time,” he says.

He likes the opportunity to be able to earn additional income. “Working for yourself means you can increase the size of your business if you want to push yourself.”

Billy also loves the work/life balance that he now has with Crest. Although some of his work is at unsociable hours it gives him plenty of time during the day to spend with his daughter.

Sonia works part time in the hospitality industry but she also helps her husband look after his CrestClean customers.

CrestClean’s Invercargill Regional Manager Glenn Cockroft praised Billy’s work ethic and commitment to his customers. “Billy has been with Crest for coming up to two years and says he still loves everyday he is here.

“He loves the interaction that he has with many of his clients and he has more than doubled the turnover of his business.”

Before they bought their home Billy and Sonia had considered relocating. They thought about Christchurch but soon figured they were better off where they were.

“We compared Invercargill with other cities and we realised it is not expensive here for housing and there is a lot of development going on,” says Billy.

Invercargill is a city included in CrestClean’s Move to the Regions Programme. There are many benefits of living in the regions: Earnings are the same as the big cities, costs are way less.

A range of financial incentives are available with up to $3,000 towards relocation costs for people joining Crest under its Move to the Regions Programme.