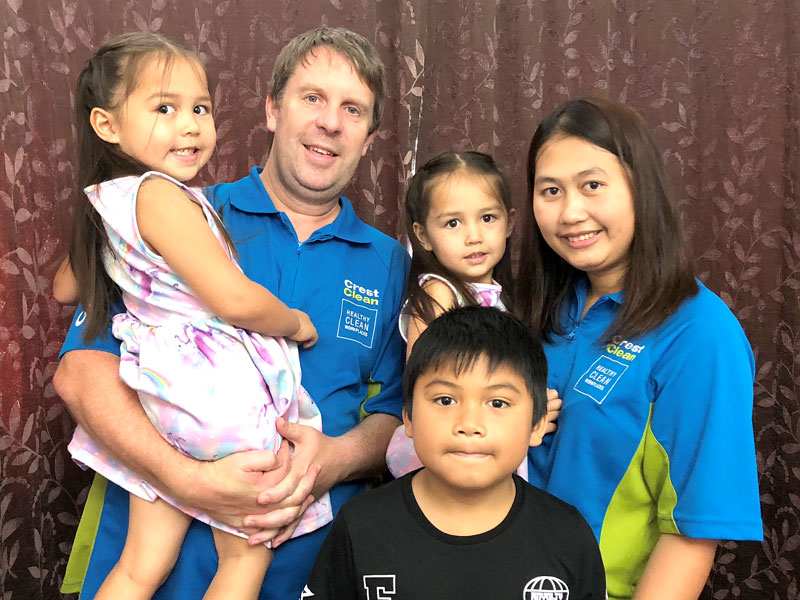 Aaron and Viyada Corbett with their children, twin girls Aria and Amika and son Nite

For Viyada Corbett, being able to have a business of her own was something she never thought would be possible. “It’s awesome, just amazing,” she says.

“When I came to New Zealand it was my dream to have my own cleaning business.”

And it’s not only the pride of being her own boss that gets her excited. The move has enabled her to spend a lot more time with her husband Aaron and their three young children.

Before joining Crest, Viyada worked in the Koru Lounge at Wellington Airport and for a residential cleaning company.

Now Viyada’s working life is vastly different. Gone are the punishingly long days cleaning that she once endured as an employee. Her working day would begin at 4am – but it could often stretch to 9pm if she filled in to cover for personnel who called in sick.

Viyada runs her CrestClean business with some help from Aaron, who has a high-flying management job for an airline.

Aaron is a workforce co-ordinator for Air New Zealand – but he has no qualms about donning a CrestClean uniform after he clocks off for the day and helps his wife look after her customers in the Hutt Valley.

“When I’m on earlies I start 5am. After work I come home, have a small break and then I will go and help Vi out for the rest of the night.

“She does all the hard yakka and I do the vacuuming and take care of the rubbish.”

The couple met in Thailand six years ago. After moving to New Zealand to be with Aaron, Viyada initially worked as a cleaner for a New World supermarket.

“Vi is very entrepreneurial and really wanted her own business,” says Aaron.

He was no stranger to the cleaning industry. “My first management position was looking after the Air New Zealand cleaning team,” he says.

And buying a CrestClean franchise made perfect sense, he adds. “I saw it very much as a good business model.”

But it was a stroke of good fortune that led them to CrestClean.

At the time Viyada had been working for a domestic cleaning company. One of her customers just happened to be CrestClean’s Hutt Valley and Wairarapa Regional Manager, Zainab Ali.

“Viyada was a cut above all other personnel/companies I had used before,” Zainab says.

“She’s proactive, shows initiative and her work is of a high quality. These are the things that stood out to me.

“I then noticed that while she is very shy, she is very good at communicating and checking in with her clients. I asked Viyada if she would be interested in looking into a CrestClean franchise.”

Zainab says she was delighted to help Viyada fulfil her dream. “Owning her own business is very important to her. As Kiwis we generally look to have our own home – but for Thai people owning your own business is the same, it’s the ‘Thai dream’.

“Joining CrestClean has meant that Viyada has been able to do just that.”

Viyada says she hasn’t looked back since joining CrestClean. She’s been impressed by the support she’s received from Zainab and her team.

“The CrestClean managers are very good and really take care of you. The training was very good.

“I’d never had any proper training before I joined CrestClean.”

Viyada has her sights on growing her business. In the meantime she’s been receiving glowing feedback about her work.

“Viyada’s work ethic and commitment to providing a high quality of service for her clients means her customers are delighted with her,” says Zainab.

“Her current clients include large sites for the Hutt City Council and also smaller offices in the regions, and they are all exceptionally happy.”