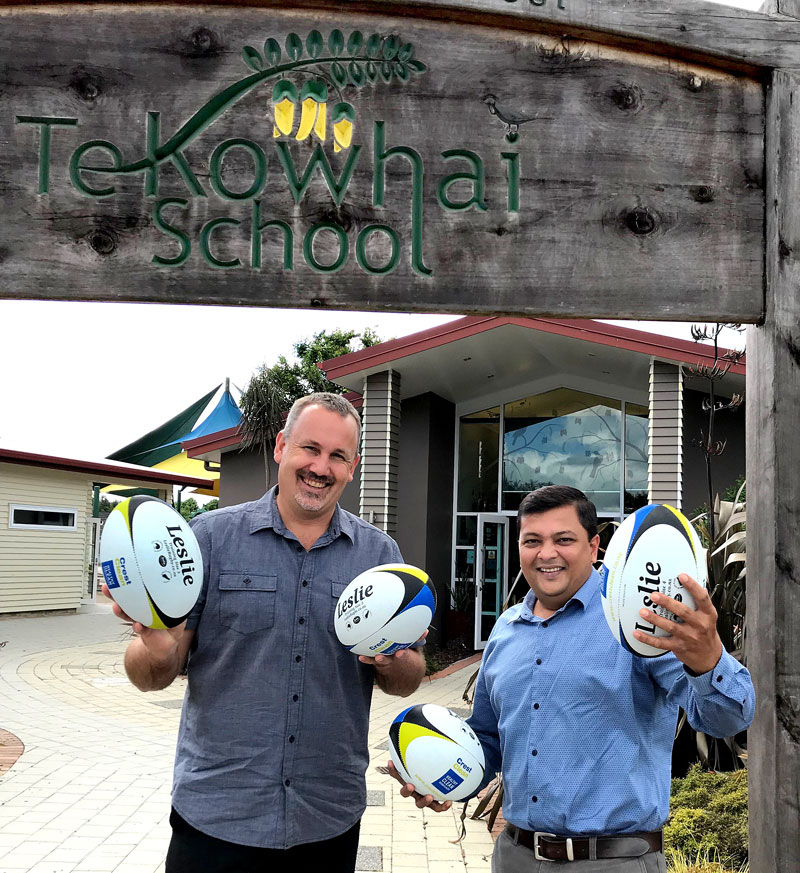 There will be no shortage of rugby balls when kids return to Hamilton’s Te Kowhai School next term.

Tony Grey was one of six lucky principals who won a bag of rugby balls as part of a promotion to celebrate the success of Crest PropertyCare – CrestClean’s new caretaking service for schools.

“It’s a nice bonus especially at this time of year,” said Tony after being presented with his prize by Nivitesh Kumar, CrestClean’s Waikato Regional Manager.

“It’s extra gear either for PE or for prizes next year,” Tony added.

“Anything that’s sponsored or donated is always welcome and it will certainly make a difference for the students.

“It was a pleasant surprise when I saw I’d won. I don’t normally enter these things as you’re flack tack as a principal. But it was a nice easy thing to enter and I just thought, ‘nothing ventured nothing gained’.”

Crest looks after the school’s cleaning needs, a service Tony is more than pleased with.

“The cleaners are brilliant and we treat them as members of our staff. They are a husband and wife team and they do a great job. We are very happy with the quality of service.”

Presenting the rugby balls was a real pleasure, says Nivitesh. “We like to give back to our schools and sports equipment is always well received.

“Tony is on the managing committee of the Waikato Principals’ Association and CrestClean’s relationship with him goes back quite a number of years.”

CrestClean is a long-standing Bronze sponsor of the Waikato Principals’ Association.