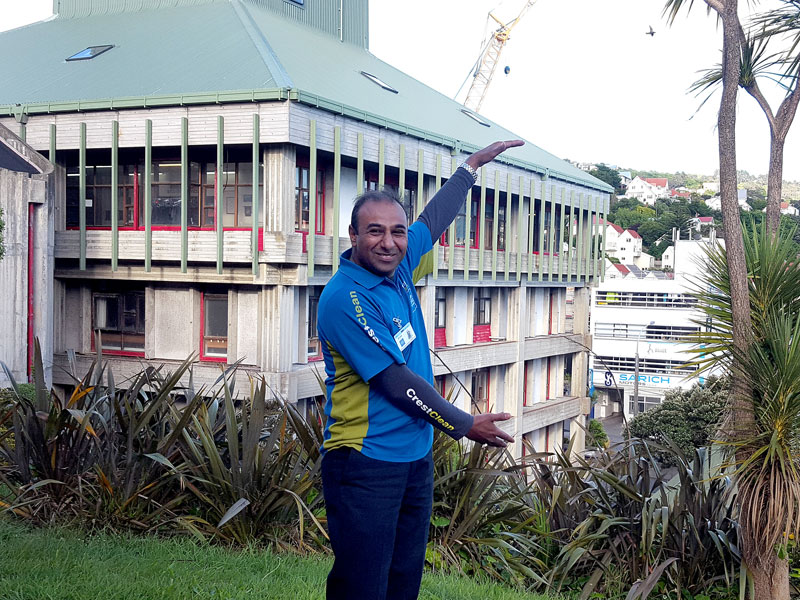 Asad Siddiqui shows the five levels of the school he and his wife clean each night.

Cleaning used to be a tall order for CrestClean’s Asad Siddiqui as his role at a Wellington school means working between five floors.

But the 37-year-old former chef has more than stepped up to the challenge – and says he’s never felt fitter.

In just three months since buying a CrestClean franchise with his wife Shaziy, Asad has found some unexpected health benefits.

“I’d been planning to do some exercise for five or six years. Since I started cleaning I’ve lost weight and have a lot more stamina than before,” he says.

The couple’s cleaning tasks at the school are spread over five levels of the building. It means they are up and down 500 steps each night.

“At first the days were hard and I was very tired, but now I’m used to it and I feel much healthier,” Asad says.

The couple love the fact they now get to spend weekends together – a far cry from when Asad was working in the hospitality industry.

As head chef at an Indian restaurant in Porirua, weekends were always taken up by work. And even after he left to start taxi driving, the hours were still antisocial.

“I wanted a Monday to Friday job so I could spend time with the family,” said the father of two.

“I came to New Zealand in 2000 and unfortunately up until now I’ve not had a job that gives me weekends off.”

CrestClean came onto the couple’s radar through a friend who owns a cleaning franchise.

And in the short time they’ve had their cleaning business life has changed dramatically, says Asad.

“I’ve always put a lot into my work and I enjoy what I do. It’s going really well and we are very happy.

“We will be increasing the size of our business first and then later on we’ll be able to buy a house of our own.”

Philip Wilson, CrestClean’s Wellington Quality Assurance Co-ordinator, said Asad and Shaziy have made a great start to their cleaning career.

“The two have impressed me right from the minute they started with CrestClean.

“Their quality of work, and attention to detail at such an early stage with CrestClean is very impressive.

“They currently have this one client, where we also have another four CrestClean teams cleaning each night.”