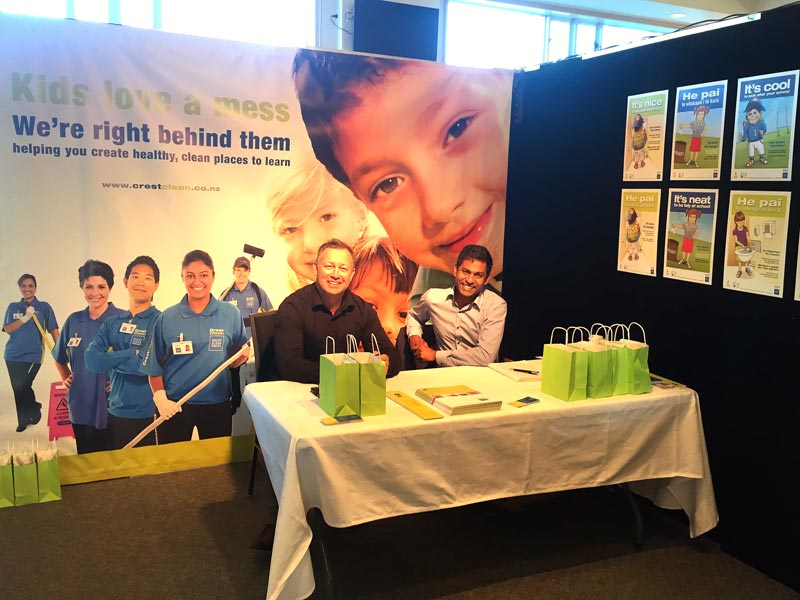 School principals found CrestClean personnel had plenty of suggestions to the dilemma of what to do after the caretaker retires.

Delegates at the Christchurch Primary Principals Association Conference had a barrage of questions for CrestClean’s Yasa Panagoda and Robert Glenie, who were manning a trade stand at the event.

“We had quite a few new enquiries. A lot of people said their school caretaker was retiring next year. They were very interested to see what we could offer.

“Most were saying that their caretaker was getting old and they were looking at what to do.

“They were particularly interested in the health and safety aspect of caretaking,” he said.

Yasa said some principals had concerns over being compliant with health and safety legislation and how that impacted on their school’s current caretaking arrangements.

He was able to reassure principals that CrestClean could take over a school’s caretaking and offer a total service that met all current requirements regarding health and safety.

Crest Property Care has a documented health and safety system based around the core duties and tasks undertaken, said Yasa.

The company carries out a site-specific risk assessment and provides comprehensive health and safety documentation. CrestClean’s caretakers have a trade background. They are trained in the safe operation of their equipment and to carry out their tasks while minimising any risks.

The conference was held at Riccarton Raceway. Crest’s personnel were kept busy over the two day event.

“We had about 130 attendees on both days,” says Yasa. “It was great to catch up with lots of our customers who gave us great feedback.”