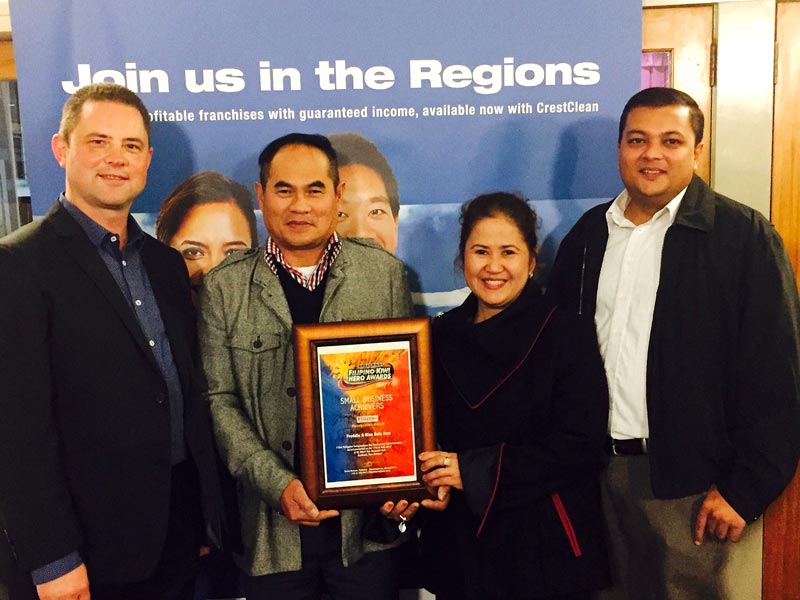 Hard-working franchisees Niza and Fredie Dela Cruz have received top honours for the success of their business.

The Hamilton couple were presented with a Small Business Achievers’ Award at a special event to recognise the outstanding achievements of New Zealand’s Filipino community.

They joined other award winners in Auckland at a Philippine Independence Day Commemoration event, which was organised by the popular publication the Filipino Migrant News.

Fredie and Niza had plently of support from CrestClean on their big night. Chris Barker, National Sales and Relocation Manager, and Nivitesh Kumar, the company’s Waikato Regional Manager, were on hand to offer their congratulations.

Nivitesh said the couple are outstanding franchisees, are well liked by their customers and had helped CrestClean gain new work.

It was great to see Fredie and Niza’s dedication and professionalism acknowledged with an award, he said. They had particularly impressed managers and staff at Hamilton’s Rototuna Junior High School where they work.

When the second stage of the school was completed, school management didn’t have to think twice about which company they would invite to carry out the cleaning, he said.

Landing the new contract was the result of the high standard of Niza and Fredie’s work there. “The credit goes to them for this achievement,” he added. “They are very professional and they really take pride in their work and their business.

“The school called me to advise they won’t be going to the market for the normal tendering process but they would like to award that new area directly to us.

“It’s a brilliant way to acknowledge our good work in the school. They think the CrestClean team is brilliant.”

Being in the spotlight to officially receive their Filipino-Kiwi Heroes Award was a big moment for the couple.

“We were very surprised and happy to receive the award,” said Niza. “It was quite an emotional moment. This is the first time we’ve received anything like this.”

Hundreds of people attended the event at Auckland’s Mt Albert War Memorial Hall. As a well as the Gala Awards Ceremony, other attractions included the Fipino Music Awards, a cultural pageant and food festival.

“It was an honour having such recognition in front of many Filipinos,” added Fredie.

The award now takes pride of place at their Hamilton home. “It’s displayed in our lounge. It’s hanging on the wall,” said Niza.

Nivitesh said the couple looked very excited to get the award. “You could see how proud they felt. A lot of people in the Filipino community know them.

“There was a great atmosphere and it was a fantastic night.”