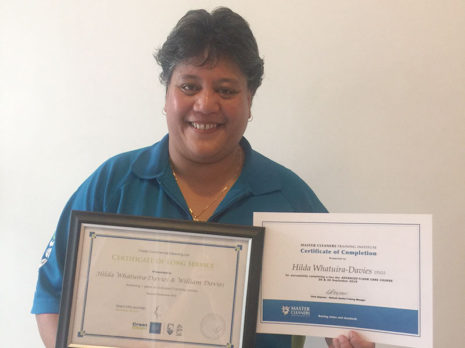 The husband and wife team received a Long Service Award recognising their commitment.

“Seven years has gone fast,” Hilda says. “We really enjoy what we do.”

The decision to join CrestClean was made easier after Hilda was impressed with the way their franchise system worked.

“I was looking at getting into the commercial cleaning industry by purchasing a franchise,” she says. “A friend who also had a CrestClean franchise suggested I look into CrestClean. I did and we decided to join.”

William, who is a full-time truck driver, helps Hilda clean customers’ premises once he has finished work.

For Hilda the freedom that comes with owning a franchise is one of the many things she enjoys about working with CrestClean.

“I can pick and choose what I want to do. It is the freedom that it gives me in my personal and business life,” she says. “I can spend time with my family and I can still work and earn an income.”