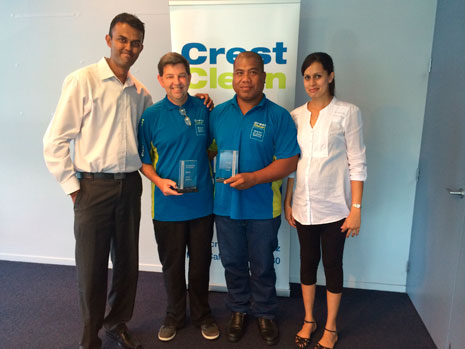 North Harbour Regional Managers Neil and Rachel Kumar were proud to present Franchisees of the Year Jim McManus and Bura Takinoa with their awards.

North Harbour franchisees Jim McManus and Bura Takinoa have been recognised for their hard work and commitment.

Jim and Bura, who have both been with Crest for three years, were awarded North Harbour Franchisees of the Year for 2014.

Jim and Bura were thrilled when they received the award.

“We were pretty chuffed. We really enjoy the work we do,” Jim says. “It was great that we both received the award. We work really hard. Our customers always give us positive feedback. It is nice to be recognised.”

North Harbour Regional Manager Neil Kumar says Jim and Bura always go out of their way to help franchisees and their customers.

“They are valued members of the team and it was nice that we were able to recognise their success. They are successful franchisees that are liked by their clients. They have helped Crest North Harbour on numerous occasions,” he says. “They have a polite and friendly nature with a positive attitude.”

Congratulations Jim and Bura, and keep up the good work!