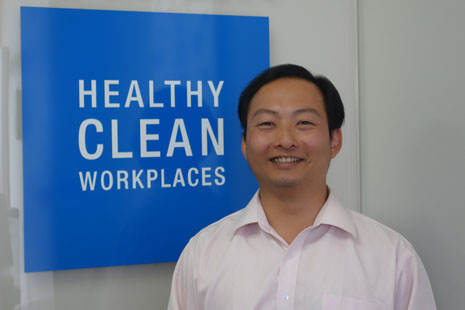 This role requires Jason to undertake quality audits, assist with implementing new contracts and be a guiding force for franchisees new to the business. CrestClean has similar co-ordinators in Auckland, Hawkes Bay, Wellington and Christchurch.

Jason’s previous experience monitoring quality assurance under the strict protocols of the dairy industry has well prepared him for this new career.

“In the dairy factory where I’ve been working the environment is high risk, so the rules are very strict about cleanliness and hygiene,” says Jason. “I like that Crest is quite fussy about quality and I’m familiar with working with really high standards.”

Jason began with CrestClean as an employee for a Christchurch franchisee three years ago. He is originally from the Guangzhou region in Southern China, a large area that he says is experiencing intense growth. Moving to New Zealand was a welcomed change. “Actually, it was not difficult to move here from China. It’s really nice here. In China, there are lots of people and here it’s really quiet.”

Jason came to New Zealand in 2007 to attend Lincoln University in Canterbury, where he studied applied science. After graduating, he took a position as a Quality Assurance Manager for a large dairy factory, and worked part-time as an employee for Christchurch franchisee, Leo Li. His excellent work for CrestClean soon caught the attention of management and when the position of Operations Co-ordinator came up, Jason was top of the list of potential candidates.

“Jason is coming to us with a proven background,” says Chris Barker, National Sales Manager. “He started as an employee for a successful CrestClean franchise in Christchurch where he built a good reputation over almost three years.”

Asked what he likes about working with CrestClean, Jason says, “The people in Crest are amazing. They’re so friendly and treat me as family. I love working here.”

“And this new opportunity is exciting,” he adds. He’s currently working in Auckland on a short term contract with a dairy company, and he and his wife and two year old daughter are preparing for the move to Hamilton, where he’ll be located in order to perform this role for Crest.

“We feel it’s a good move and we’re looking forward to experiencing a new place,” he says. “I really want to grow with the company and learn from this new position.”