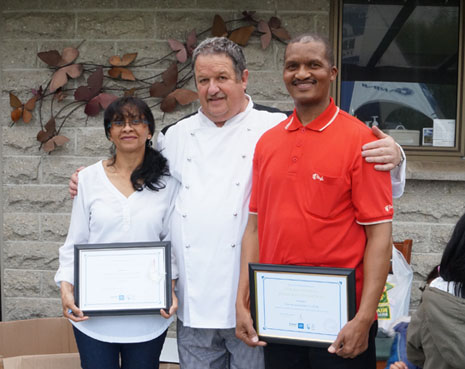 When you’ve been at your job for several years, the temptation might be to sit back and relax, but not for Harry and Genevra Ficks.

Not only have they completed five years of service with CrestClean – and are, in fact, the most veteran team in the area – but they are also Invercargill’s Franchisees of the Year.

The two awards were presented at the recent Christmas function for CrestClean’s Invercargill team, held at the home of Regional Manager Glenn Cockroft and attended by 70 franchisees and family members.

“Harry and Genevra are highly respected by not only their clients, but also by the other franchisees in the area,” says Glenn. “They are both Regional Trainers and as a couple they have trained a number of our franchisees, so they are very well known and an integral part of the team here.”

Harry and Genevra and their two sons emigrated from South Africa several years ago. They worked in various areas throughout New Zealand before finally settling in Invercargill five years ago, at which time they also purchased a CrestClean franchise.

“They are a hardworking team I can always rely on and they work together in all of their cleaning contracts, bringing true meaning to the concept of teamwork,” says Glenn.