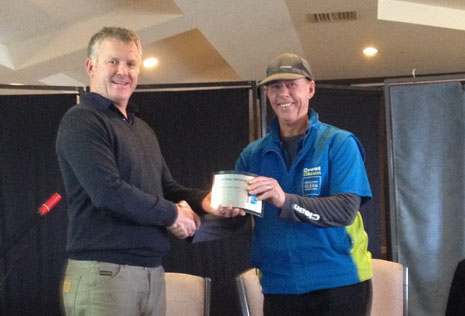 After 12 years as a CrestClean Franchisee in Christchurch, Jason Dalziel says, “The thing I like the most is the people I work for.”

“Like anyone, sometimes I feel like I just don’t want to go to work, but for example, I clean New Brighton School in Christchurch and after I get there and get into the first conversation with a teacher, it turns me around. It’s such a good feeling.”

Jason was drawn to the idea of purchasing a franchise after seeing an advertisement with CrestClean-branded vans and thinking it would be good to be able to drive around and work in lots of different settings, rather than just one place everyday. He and his wife, Marilyn, initially purchased a $70,000 franchise in 1998 – one of the first in Christchurch. They later sold it, but then bought it back in 2004 when the person they sold to decided to move on.

Since those first days, he says. “The changes have been phenomenal. Now, I’ve seen training systems that really work, Crest has developed their own chemicals that are environmentally responsible, which is fantastic. I’ve also seen the directors pouring a lot of resources back into the company to make it better.”

He also gives Christchurch’s Regional Manager, Yasa Panagoda, a big nod. “He’s brilliant. He bends over backwards to help franchisees. There was a guy who was hit by cancer and Yasa was out at all hours of the night doing his cleaning so he wouldn’t lose his customers. He’s a real asset to Christchurch North.”

There have been some special moments over the years, as well, like before the earthquakes when he and his wife were cleaning a high rise building after a function and the organisers invited them to enjoy some of the leftovers. “We got to sit there and have a glass of wine and some nibbles with this amazing view of the city. That was really awesome.”

“I can’t think of anything else I’d rather be doing. I’m 60 in a couple of weeks and the only alternative is operating a stop-go sign and I’ve done that. It’s soul-destroying work. Cleaning is good, clean work.”