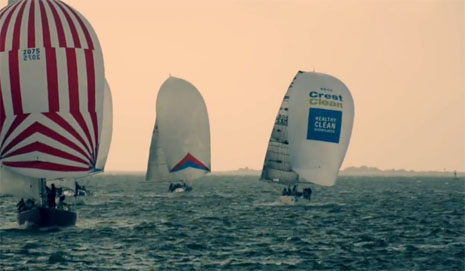 Aucklanders were treated to some sweet eye candy on the Waitemata Harbour on a recent weekend.

The hearty crew aboard Gale Force kept the heat on the competition at the Royal New Zealand Yacht Squadron’s Winter Series race on the 2nd of August, as captured in this great video posted by Live Sail Die.

The CrestClean spinnaker flies on Gale Force, an Elliott 1050 owned by Craig Fraser, and it has an esteemed history.

Gale Force is an Elliott design cruiser racer,10.5 metres in length, previously owned by Dave Mason, who works with us on CrestClean’s brand. Dave entered the 2011 North Island in a short-handed race run by The Short Handed Sailing Association of NZ.

Dave was a proud skipper as Gale Force led the fleet at the start of the race, with the Healthy Clean Workplace spinnaker flying high amongst other national and international brands.

Gale Force has since done another race around the North Island and is now owned by Craig Fraser in Auckland. The video shows the mighty CrestClean spinnaker helping Craig and his crew finish 13th in the race. They’re now in fifth place in their division of 22 boats in the Winter Series. Best of luck with the rest of the season!