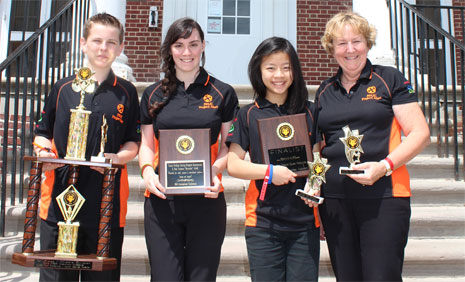 Project Alert, a team comprised of Year 10 students Courtney Powell, Cailey Dayu, and Dylan Townsend, brought home 1st Place in the Human Services Category, Middle Division, for their “Silent Alarm,” a vibrating device that warns deaf students in the event of a fire alarm. The team developed the innovative alarm to assist their deaf peers who felt confused and powerless whenever there was a fire alarm at school.

They were also awarded the supreme Community Problem Solving Award – the E Paul Torrance “Beyonder” Award – which is given to a project that “outdistances the others so far that they are not even on the same scale.” It is awarded to a team who has “demonstrated exceptional depth, passion and commitment in the project that goes above and beyond what would normally be expected.”

The team received $1000 of sponsorship from CrestClean and wore jerseys printed with the company logo on their sleeves. South and East Auckland Regional Manager Viky Narayan says, “Their win is our win. We’re quite happy to support projects in the education sector.”

“This was obviously an amazing experience for the students and it would not have been possible without support such as that from Crest,” says Mission Heights Junior College Principal Joan Middlemiss. “I was immensely proud of the work the students did and they really did perform beyond what would normally be expected, just as the Beyonder Award recognised.”

The Mission Heights students competed against 61 international teams from all age divisions. In the 40-year history of the competition, Project Alert is only the second team from New Zealand to ever win this award. Congratulations!

Have a look at a video the students made for the award.