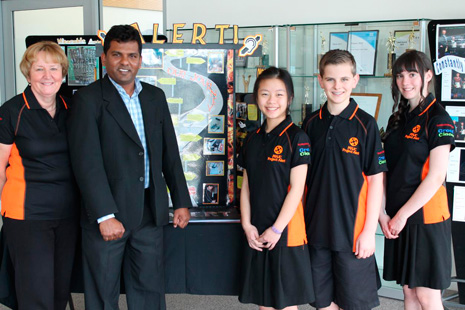 Crest is delighted to be helping a team of high achieving students from Mission Heights Junior College to attend the Future Problem Solving International Competition in the USA this month with a sponsorship of $1000.

The Year 9 students, Courtney Powell, Cailey Dayu, and Dylan Townsend, worked throughout 2013 to develop a “Silent Alarm”, which the 14 deaf students at the school can carry to warn them in the event of a fire alarm.

The team was motivated by the deaf students concerns that they felt “confused and powerless” whenever there was an alarm, and wanted to address what they saw as a real issue for them.

The team’s invention has empowered their classmates with a feeling of safety and inclusion, and the team feels the device has much wider applications for the general community.

The students have already received six different awards for their innovative work, including at NIWA Science and Technology Fairs, and were judged national winners in the Community Problem Solving (Middle Division) at Future Problem Solving NZ earlier this year.

Mission Heights Junior College said they are very grateful to the companies, including Crest South Auckland, who is helping to support “these amazing students” in achieving their goals. Crest wishes them all the best for the competition.