The Real Dirt on Desks 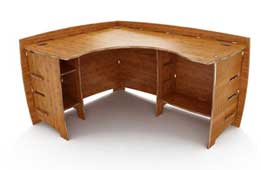 One of the worst places for bacteria in an office is on the average desk or workstation.

University of Arizona germ guru Professor Charles Gerba has studied bugs and bacteria for around 30 years.  More recently he has turned his attention to the workplace and in one study found that the average desk harbours 400 times more bacteria than the average toilet seat.

In one study of offices in several US cities, telephones came in the number one hot spot.  This was followed by desks, water fountain handles, microwave door handles and computer keyboards.

Without proper cleaning, a small area on the desk or phone can sustain millions of bacteria that could potentially cause illness, according to Gerba.

With people spending more time at their desks, bacteria are finding plenty to snack on.