Auditor impressed by standard of cleaning provided by CrestClean 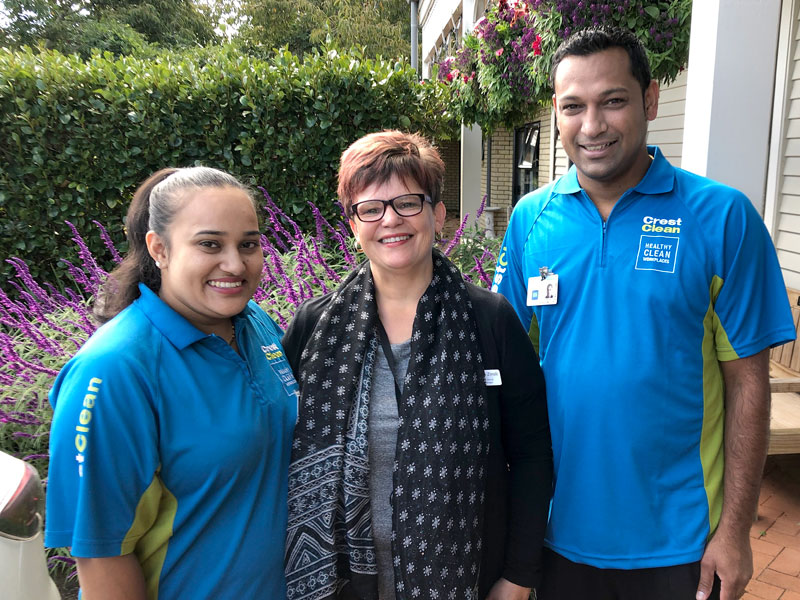 The high standard of work carried out by CrestClean at Hospice West Auckland received a special mention during an official Government audit.

“It went really well and the auditor was especially impressed with how clean the premises are and how tidy the cleaners’ workspace was,” says Amanda Zinsli, the hospice’s Quality and Clinical Projects Manager.

The auditing process is crucial to the hospice maintaining its certification through the Ministry of Health, says Amanda.

She says CrestClean’s Edwin Prakash and Ashna Devi, who look after the cleaning at the Te Atatu Peninsula site, are highly regarded for their strong work ethic and attitude to the job. “Edwin and Ashna have been very helpful and valuable in the preparation for this audit,” she says.

“The day before the audit I spotted two or three things that needed to be done. Edwin was already in his car ready to leave after work and I called him back. He was happy to do what I requested and was really helpful.”

Amanda says Edwin and Ashna understand their responsibilities well. “I just think we have a good relationship, I think that’s what makes the difference.

“I don’t have to give the same feedback week in and week out. Once I’ve asked Edwin to look at a certain area and explain why, he takes it on board.”

The couple’s work has been noticed by other senior staff members at the hospice, she says. “Even our CEO commented last week that they are the best cleaners we have ever had.”

Amanda says maintaining high standards of health and hygiene is imperative at the hospice.

“Patients often have a low immunity so they are at higher risks of getting infections. So we have quite strict protocols around infection control and having a clean environment.”

Caroline Wedding, CrestClean’s Auckland West Regional Manager, says Edwin and Ashna work to a very high standard. “As a direct result of feedback from customers they have received many Certificates of Excellence from CrestClean.”

The award is not only a shining accolade to the success of their cleaning business, it’s brought personal pride for Edwin and Ashna.