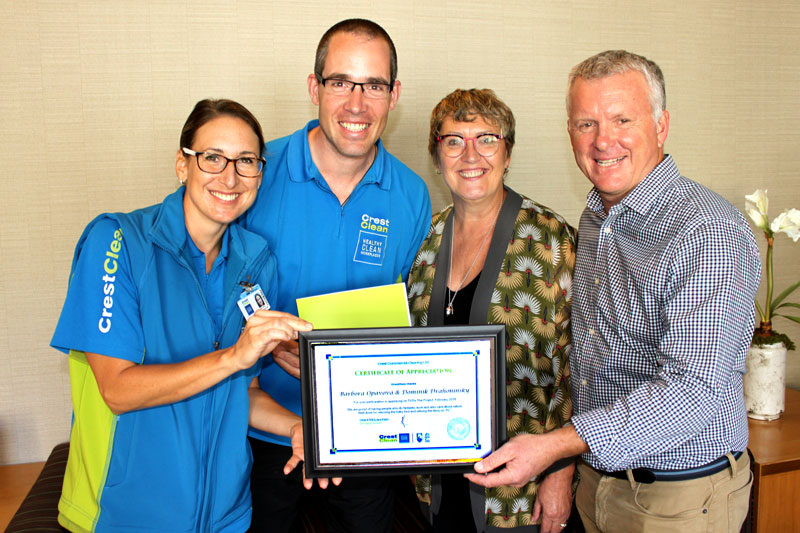 CrestClean couple Dominik Drahoninsky and Barbora Opavova, who saved the life of a baby bird that was stuck in a drain, have been officially thanked by company boss Grant McLauchlan.

A heart-warming video of the rescue at Hobsonville Point Secondary School captivated viewers throughout the country when it was featured on TV3 programme The Project.

In recognition for the wild life rescue, Barbora and Dominik were recently presented with a special Certificate of Appreciation at CrestClean’s annual conference in Auckland. Grant, CrestClean’s Managing Director, praised the couple for their speedy intervention in releasing the trapped bird.

“We are proud of having people who do fantastic work and also care about nature,” he told the gathering of CrestClean senior personnel from around the country. “Well done for rescuing the baby bird and reliving the story on TV.”

The drama had unfolded at the West Auckland school when Barbora was taking out the rubbish and spotted the young pied stilt chick taking its first steps near some bushes.

But to her horror, the young fledging she had been watching suddenly toppled into a deep storm water drain.

Quick-thinking Dominik arrived on the scene and lifted the heavy drain cover to reveal the bird trapped deep below ground level. He grabbed an attachment from his vacuum cleaner and skilfully used it to gently scoop up the young chick.

Meanwhile, the whole drama was being filmed by Barbora, who captured the bird’s remarkable rescue on her phone.

Barbora says taking a video was a split second decision when she saw Dominik spring into action. “I thought to myself ‘this is something fun we can watch and share with other people’.”

And her video skills have impressed her partner. “She had perfect timing and did brilliantly in filming what happened,” says Dominik.

“The last few seconds of the video capture the little bird walking again. It was perfect.”

The couple’s actions in saving the bird were also applauded by an Auckland veterinary surgeon, Dr Berend Westera, who said it was great work. “It’s wonderful.”

Barbora and Dominik have been with CrestClean for the past five years and are originally from the Czech Republic. They met through their involvement with the European Voluntary Service.

Dominik came to New Zealand to improve his English and became a carer, working with people who are disabled though having sustained a brain injury. Barbora, who has a master’s degree in teaching, followed Dominik to New Zealand and found work in a kindergarten.
You can watch the full TV3 video from The Project below: