‘Happiest cleaner’ thrilled at official thank you from CrestClean 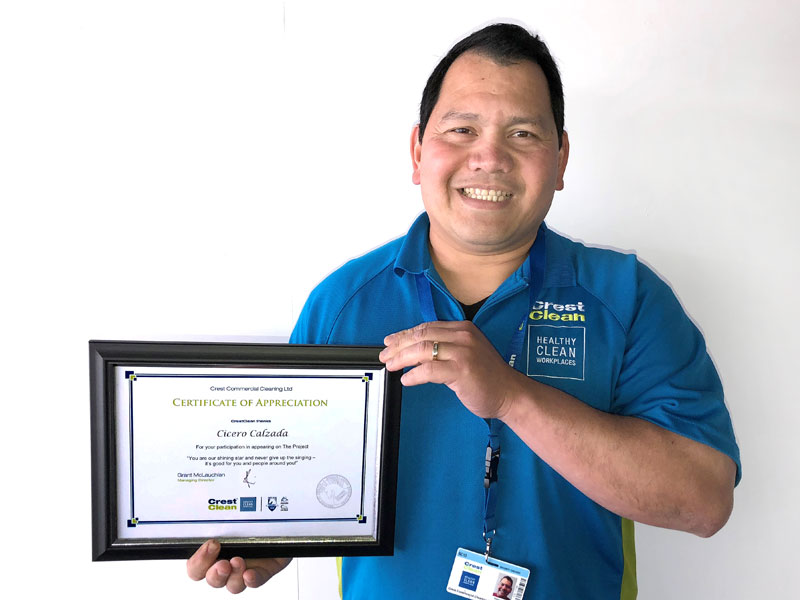 Cicero Calzada has received a Certificate of Appreciation after his appearance on TV Three’s The Project.

It might have been several months since he appeared on TV screens across New Zealand but people are still recognising Cicero Calzada’s cheery face.

The CrestClean business owner, from Ashburton, was dubbed the nation’s happiest cleaner when he was filmed for TV Three’s The Project in the show’s weekly roundup of “good news”.

Viewers saw Cicero boogying to his favourite songs while he was mopping and polishing. He told The Project’s Kanoa Lloyd he loves singing along to retro tunes as he works, and singing is all part of his Filipino culture.

Cicero says people still stop him when he’s out and about in Ashburton. “They come up to me and say ‘so you’re the happiest cleaner, aye?

“Other people will ask me ‘are you the one I saw on TV? Is it really you?”

But as well as Cicero’s customers, CrestClean’s Managing Director Grant McLauchlan has also been singing his praises. In a special Certificate of Appreciation, Grant has thanked Cicero for the cheerful way he goes about his work.

“You are our shining star and never give up singing. It’s good for you and the people around you,” the certificate says.

“I’m still getting customers who saw him on The Project and others who had read the story in the local paper.

“Cicero was really thrilled by his 30 seconds on TV and it will be long remembered in Ashburton.”

It was while cleaning at Bunnings, Ashburton, that Cicero’s talent for singing was first noticed. Staff there loved hearing him sing along to the retail store’s catchy ‘80s pop melodies.

And he’s still as popular as ever when he pops in to clean the store. “Some customers who I know in Bunnings will come up and say ‘will you be singing along to the music today!”
You can view Cicero’s featured on TV Three below