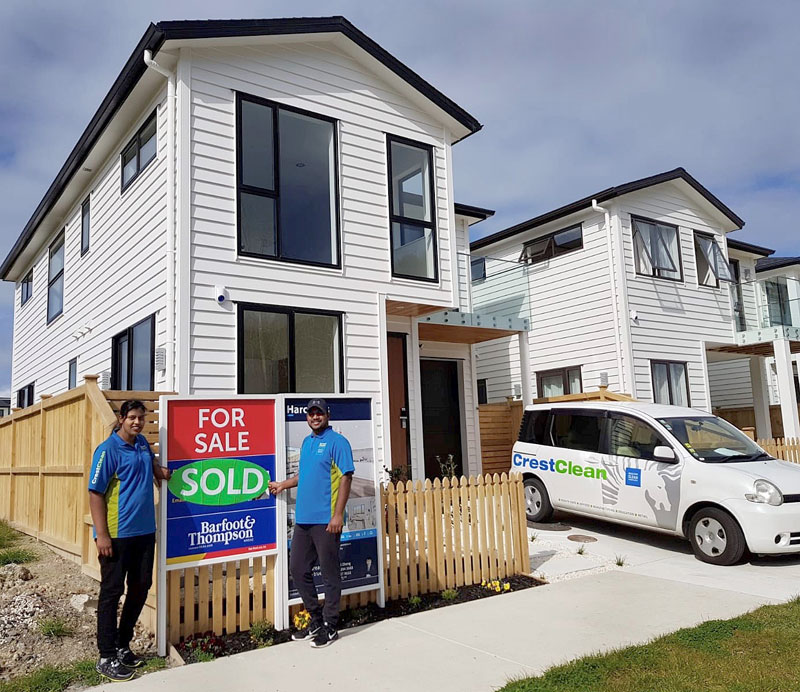 Mitra Kancharla and Jeevan Gundampati have just moved into a brand new home in Hobsonville Point.

It was an occasion that just couldn’t pass without a photo to celebrate receiving the keys to their brand new home in one of Auckland’s fastest growing and sought after suburbs.

And their beaming faces are a picture of pride, as Jeevan Gundampati and Mitra Kancharla pose together in front of the spacious five-bedroom property. The couple, who own a thriving CrestClean business, could hardly believe the day had finally arrived when they became homeowners.

With Auckland’s skyrocketing house prices, being able to get a foothold on the city’s property ladder is a worthy of praise and an achievement the young couple can be truly proud of.

“It was our dream come true,” says Jeevan. “I know so many people dream about having their own house in Auckland but we have made it.”

The property, in a stylish new development at Hobsonville Point, has a large open plan kitchen/lounge area. The two-storey family home has a floor area of 220sq metres and two of the bedrooms have en suite bathrooms.

Being in a position to buy a home reflects Mitra and Jeevan’s commitment to succeed and a determination to grow their CrestClean business.

It was just two years ago when they bought a small CrestClean franchise while they were still working fulltime for Z Energy in Auckland. At the time they both had management roles for Z at two of the company’s sites on the city’s North Shore.

They found they were spending precious little time at home. “We’d just go home to sleep. We used to have lunch out rather than homemade food, then we thought ‘this is not going to work, we have to start looking after ourselves’.

“We then took a decision to give up our day jobs so we could be fulltime with CrestClean. It was not hard to come to that decision. We think we made the right decision!”

They threw themselves into their CrestClean work, enjoying the extra time they were now spending together. They soon increased the investment in their franchise, growing their business fourfold.

Owning a successful business meant obtaining a mortgage was not hard, says Jeevan. “The bank was happy because we own a business and they could see the turnover and the cash flow.

“The main thing they were happy with is that we have a guaranteed income. They could see the time we’ve been with CrestClean and that our business was gradually increasing, so that certainly helped with the decision.”

The couple say working for themselves is incredibly rewarding. “We are proud to have our own business and we believe it is a big achievement for us,” says Jeevan. “We are our own bosses and we’ve now managed to buy a house. We’ve ticked it off our bucket list!”

“They bring the ‘wow’ factor to the standard of their work. Since joining CrestClean they have increased the size of their business and managed to buy a lovely new home in a very nice area of Auckland.

“They are a genuine hardworking couple who deserve absolutely everything they get.”

Mitra and Jeevan’s high standard of work has been recognised by CrestClean. The couple have been appointed as Regional Induction Trainers for Master Cleaners Training Institute.

Jeevan enjoys the role, which includes training and mentoring new franchisees. “It’s like family when you are with CrestClean. We tell the franchisees that at the end of the day it’s your business and you’re going to be your own boss.

“I enjoy passing on our experiences and what we’ve gone through during our time with CrestClean.”