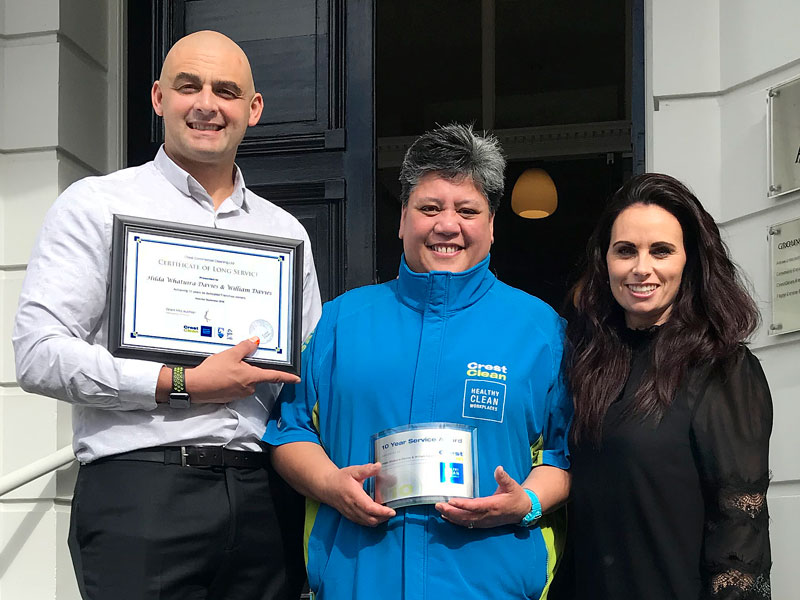 In 2008 Hilda Whatuira-Davies found herself at a crossroads in her working life when she was made redundant.

After five years at Sealord Dunedin, Hilda decided to seize the opportunity to do something completely different when the company announced it was shutting its fish processing plant.

She considered becoming a delivery driver and went on a polytechnic course to get a heavy goods vehicle licence. Although successful in obtaining her a class 4 licence, Hilda decided not to pursue a driving career and found a job as a packer for a furniture removal company.

But with a hankering to work for herself, Hilda decided to buy a small CrestClean business. Now 10 years later she and her husband William, who works fulltime as driver for a freight company, have just reached a major milestone with the CrestClean.

Hilda and Willie are a “very much loved team”, not only by the CrestClean Dunedin but by their past and present customers too,” says Nicky.

“They go well beyond what’s required for their customers and their work ethic is amazing, they sure are one of lives wee treasures.”

Hilda admits that she was “just trying to figure out what I wanted to do” when CrestClean came onto her radar, almost by chance.

“I was looking around on the net and asking friends and family for suggestions and then I came across a couple who live nearby who had a CrestClean business,” she says.

“I thought ‘what I am good at. I can clean, I can do that’.” After meeting the couple it didn’t take long before Hilda knew that purchasing a cleaning franchise was the way to go.

“I went and spoke to them and I was soon convinced it would be a good decision to go with CrestClean. I could see that CrestClean takes care of everything, like your GST and health and safety. It all sounded really good.”

For Hilda, the freedom and extra time that comes with owning a franchise is one of the joys she loves about having a CrestClean business. “I love working for myself. It gives me so much freedom to do what I want to. I’m not tied to an 8.30am to 5pm job.”

Desiree Miller, H&J’s Sales Manager, says Hilda and William do an outstanding job of the cleaning and nothing is ever too much trouble.

“We are very busy we have a lot of people coming through our store each day. If we didn’t have Hilda and Willie to help us clean it we’d be there all night doing it ourselves!”

The couple’s efforts have not gone unnoticed by the store’s management, says Desiree. “Our CEO said it the other day, ‘Hilda and Willie are part of H&J’s family’.”

Hilda and William always receive a warm welcome from staff when they arrive each evening to clean the department store, she says. “The loveliest thing is not only are they excellent at their job, they come in just before we close and you hear everybody yelling out to them. They are just part of our team.”

Working at H&J brings Hilda much pleasure and doing a good job is rewarding, she says. “I just like making everything look nice for the customer. I like to give them the ‘wow’ factor when their customers walk into the store.”

CrestClean’s Dunedin personnel put on a morning tea to celebrate Hilda and William’s 10 years with the company.

Hilda says they want to acknowledge the assistance they’ve received from Tony and Nicky as Regional Managers.

“The support from Tony and Nicky has been amazing. Everything that they do is great and they are always there to help and guide us.”