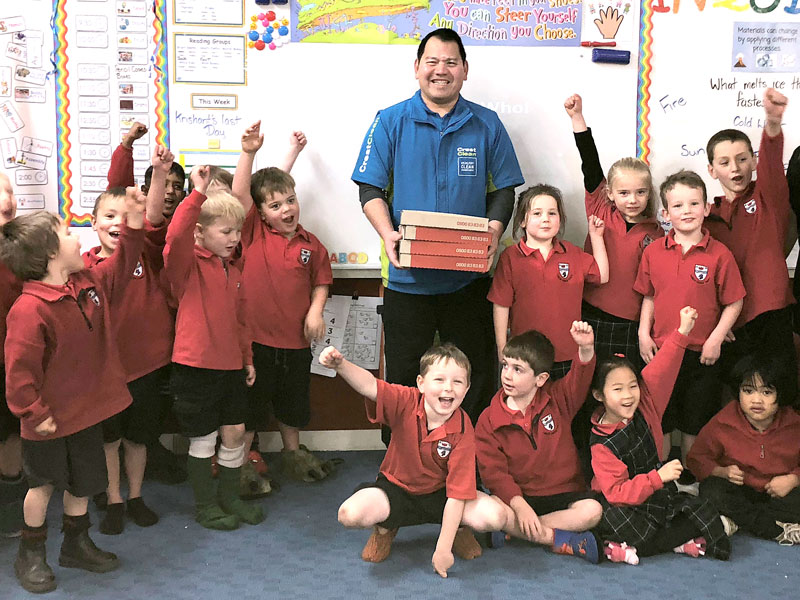 There was a big cheer for CrestClean’s Cicero Calzad when he delivered a tasty treat to Ashburton Borough School.

The Room 2 youngsters were rewarded with a pizza lunch for winning Crest’s Cleanest Classroom Award.

The competition is run at many of the 500 schools throughout New Zealand that are cleaned by CrestClean franchisees. The classroom that is kept the cleanest in the school is awarded a certificate and a prize at the end of each term.

“It’s tricky trying to get kids to clean up after themselves.” She added: “They don’t actually always come to school with all of the social skills that you might expect.

“Schools are taking on a lot more of those sorts of roles of teaching manners and respect.”

She says the pizza was the incentive to win but the competition also connected the children with the person responsible for the cleaning. “The kids get to meet the people who make their classroom a better place.”

Robert Glenie, Crest’s South Canterbury Regional Manager, says Cicero is diligent in his work and does a great job for his customers.

Cicero, who has been with CrestClean for just three months, loves being a business owner. “I really enjoy the work and looking after my customers,” he says.