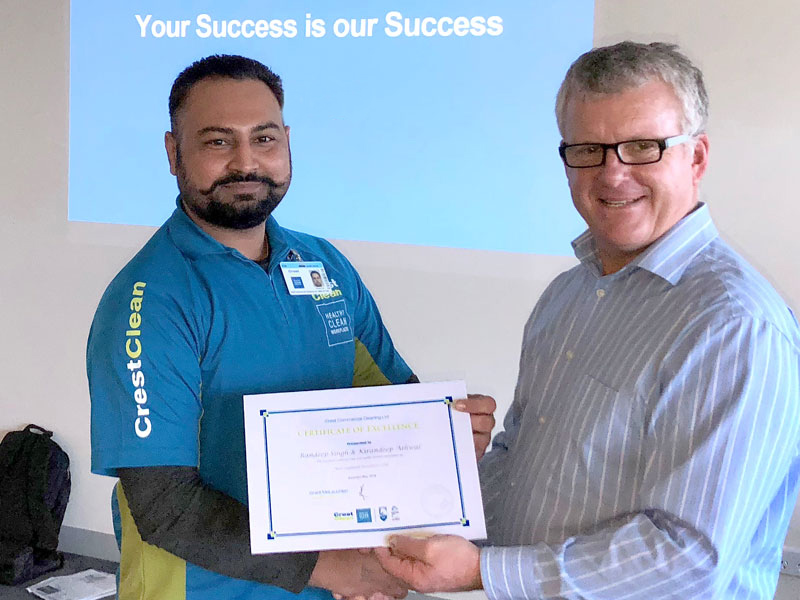 Business is booming for CrestClean’s South Canterbury region as the company builds on its strong reputation for delivering an unrivalled service.

The size of the CrestClean team has also doubled in the past 12 months, he says.

Robert believes part of the success is down to word spreading among customers who are delighted with the high quality of cleaning and the diversity of the many services Crest can now offer.

“The Crest brand is becoming a lot more familiar to people in South Canterbury.

“We’ve now been around for a quite a few years and we’ve gained a strong reputation as being a company that people can trust as they know our teams will do a professional job of their cleaning.”

Among the new customers this year is CBay, a modern aquatic fitness and leisure centre operated by the Timaru District Council.

Robert says the Crest personnel who look after the centre do an outstanding job of the cleaning. Their work was recently recognised when centre managers passed on direct feedback they had received from customers commenting on the centre’s appearance.

“There is a suggestions box at CBay and two people had commented on the cleaning,” says Robert. “They said they were impressed by how clean the place was.

“One person in particular went on to say they thought it was ‘extraordinary’ that in the middle of the school holidays a centre like this could be so clean.”

Positive feedback from customers is a regular occurrence for CrestClean’s business owners. The achievement is recognised by the company with the award of a Certificate of Excellence.

Randeep Singh and his wife Kiran were among Crest franchisees who were presented with a Certificate of Excellence at a recent team meeting for South Canterbury personnel.

It’s not the first time the couple have been praised for the high quality of their work. Last year they were presented with a quarterly prize for gaining the most Certificates of Excellence awards.

Like many others who’ve bought a Crest business, Randeep and Kiran have seen their lives totally transformed. Before they joined the company Randeep had been working long days in a freezing works and his wife had a part time job at Subway.

They are now running a very successful Crest Franchise. They employ two staff and they have been able to purchase two vehicles and are now looking at buying their first home.

South Canterbury is included in Crest’s Move to the Regions Programme. The programme provides people with the opportunity to become a business owner in areas where Crest is expanding.

The South Island offers a great outdoor lifestyle where homes are “affordable” compared with many metropolitan areas of New Zealand. Under the Move to the Regions Programme, Crest contributes towards relocation costs to help families settle outside of the country’s major cities.