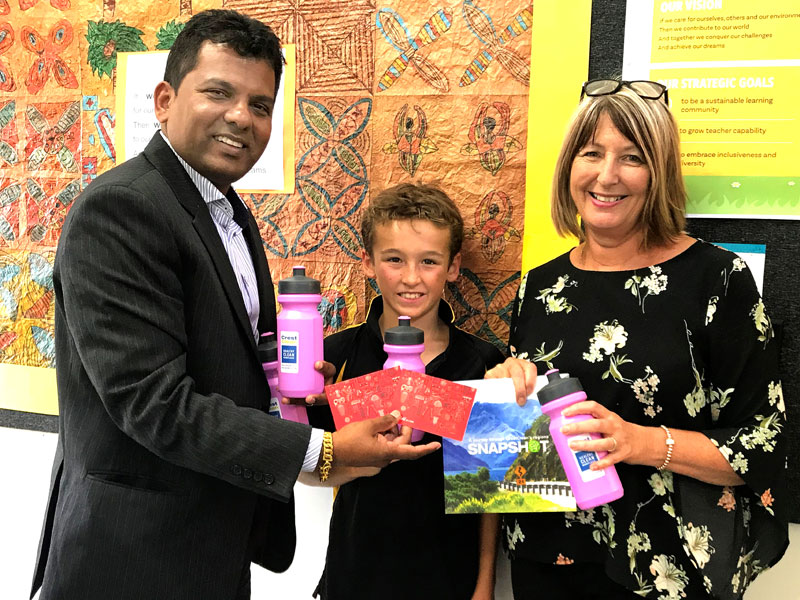 CrestClean has played a part in helping to make a school’s annual fundraiser a runaway success.

The popular Mauku Fun Run this year raised $8,000 towards school resources, the money enabling youngsters to enjoy extra activities outside the classroom.

Viky Narayan, CrestClean’s South and East Auckland Regional Manager, donated two $50 vouchers as prizes for category winners in the event. He also took along drink bottles that were included as part of spot prizes for competitors.

“I was only too happy to help out. This is a great fund raiser for the school,” he said.

“It’s a fundraiser for our school as well as being a good community event.

“It tends to be a training event for people who are doing longer events later in the season and it’s become quite well known now. We had 429 entrants from all over Auckland.”

Each year the money raised makes a big difference to the rural school, Angela says.

“Last year we built a bike track and our pool was refurbished. Without that fundraising we wouldn’t be able to keep our pool maintained and running. Anything that’s outside the classroom basically has to be supported by fundraising.”

CrestClean takes care of the cleaning at Mauku School. Angela says the cleaning team is a valued part of the school community.

“We’ve had the same team since we started about four years ago. They are very familiar with our school and during this time the standard of cleaning has definitely not dropped off.

“They are a really good team. They will do anything extra we ask of them and are very flexible. If we have an event on over the weekend they’ll come in on Sunday evening instead of Saturday.

“That’s what we appreciate, they are flexible and will go the extra mile for us.”

Angela says the work of the cleaners is much appreciated by everyone at the school.

“CrestClean are invaluable in our school. They are very good and we wouldn’t survive without them.”