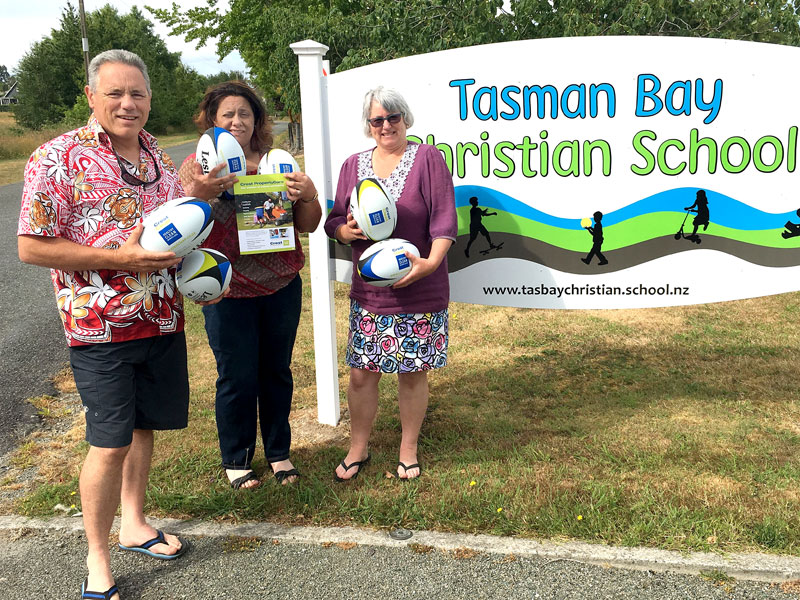 When Steve Matthews scored a bag of rugby balls for his school the timing of his win couldn’t be better.

Steve, the Principal of Tasman Bay Christian School, was one of the six lucky winners in a promotion to celebrate the success of Crest PropertyCare – CrestClean’s new caretaking service for schools.

Touch rugby is popular at the school and buying extra sports gear puts a squeeze on the school coffers.

“I was just about to look at cleaning our PE shed to see what we needed for next year, so this prize was extremely timely,” said a delighted Steve.

“The school has a touch team in Term One and Term Four, so of course this prize is just perfect.”

Steve said the balls will make a big difference for the school’s 50 pupils.

“In Term One they’ll be able to get these balls out and practise as much as they like.”

Steve admitted he doesn’t often enter competitions – but it was the simplicity of the Crest PropertyCare giveaway that caught his eye.

“When you receive 20 or 30 emails a day you tend to flick through and dump anything that doesn’t look interesting or is too hard.”

Being notified that he was a winner was news that Steve couldn’t keep to himself. “I had to go and tell everybody else straight away,” he said.

“It’s first time I’ve won anything like this – it’s rather cool. I was quite chuffed actually and I thought ‘the kids are going to love these’.”

Crest provides cleaning services to 430 schools throughout New Zealand. “Our Gold level sponsorship is a direct reflection of the importance we put on our relationship with the schools we serve,” added Barbara.