Health and safety a priority as clean up begins 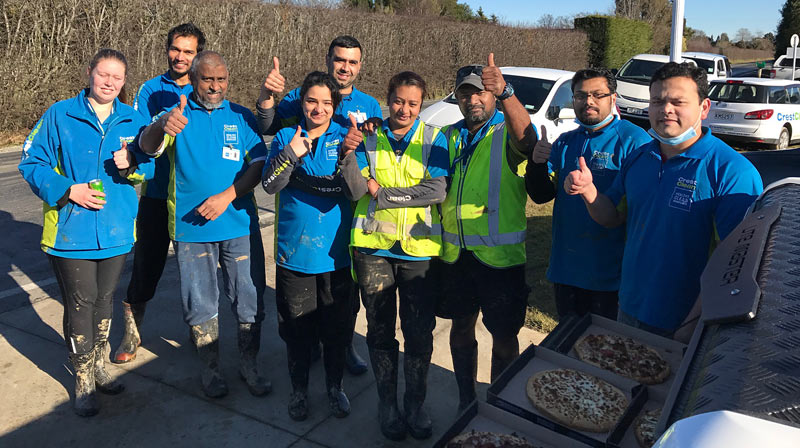 Well-earned pizza for CrestClean teams at Mosgiel pictured taking a break from the flood clean-up work.

A day of heavy rainfall across Canterbury and Otago saw river levels rise, sending a torrent of water over pasture land that washed into homes and businesses, leaving behind a thick muddy residue.

One of the worst businesses affected was the Farmlands store at Taieri. Tony said his cleaners faced a daunting task when they arrived.

“Inside there was probably an inch and a half thick of wet sloppy mud. You couldn’t see the carpet or the concrete floor.”

CrestClean personnel have won praise from Farmlands’ bosses, who said they were grateful for the teams’ “rapid response, hard work and professional manner”.

Tony said health and safety took priority before work could commence. “We did a site assessment first to assess all the hazards that were on site.

“Every one of our teams had to sign a hazard register. We labelled what the hazards were before we started work. We are a very health a safety conscious company and we wanted to make sure our guys were 100 per cent aware of what they were facing as they entered the building.”

Tony said hazards included electrical points that had been disabled and the slip factor of the mud. “The scene resembled more of a cattle shed than the inside of a building.

“We then just got stuck into it, removing mud from the first office and then just worked our way through the rest of the building.”

He said about 1000sq m of showroom floor had been affected by the flooding. “It’s got to be washed and squeegeed out, sanitised, auto-scrubbed and dried.”

Pauline Sullivan, Farmlands Senior Property and Facilities Co-ordinator, said CrestClean was prompt when the call went out for help.

“Farmlands was extremely grateful for the rapid response, hard work and professional manner of the Crestclean team.

“Their efforts helped us re-open our flood-affected site quickly, so our shareholders and customers could get much-needed supplies.”

Tony said he was pleased that CrestClean had been able to act so quickly. “One kindy had sewage around the outside of the building, which was cleaned up by us.

“The other one had water that had seeped in through an external wall. It had wet all the floor. We cleaned everything up and the kindy was ready to open on the Monday morning.”