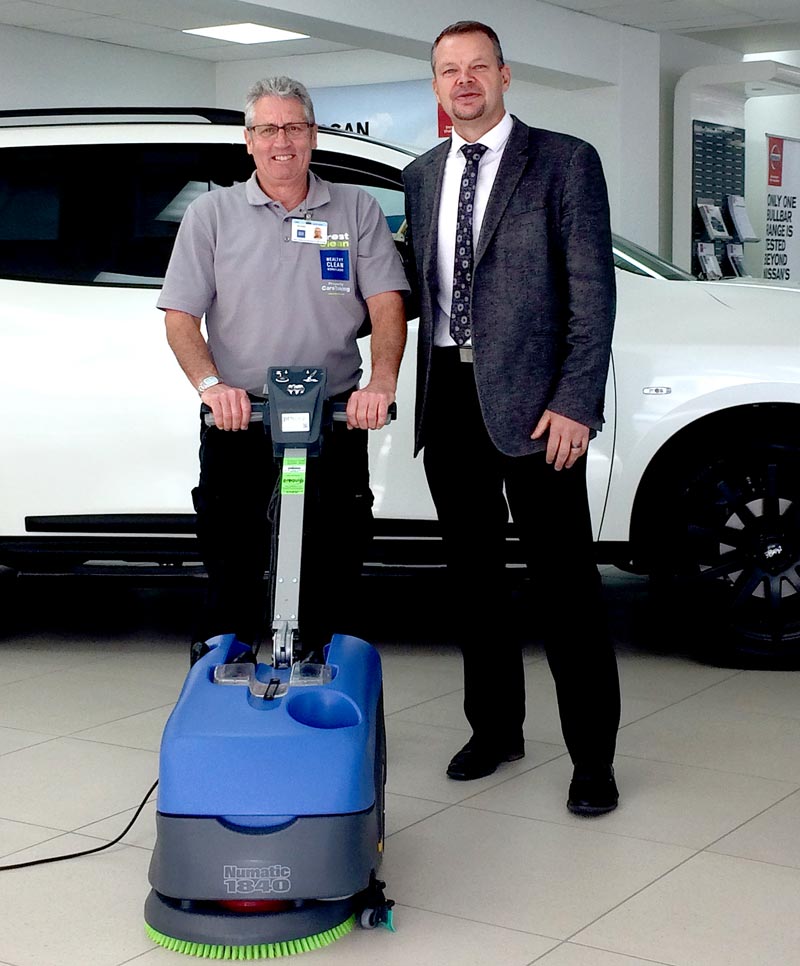 Right place, right time proved a win-win situation for everyone and solved an ongoing cleaning headache for a top car dealership.

Chris Churchward, Dealer Principal, Autoworld Timaru, was at his wits end trying to find a permanent way of keeping the showroom floor in pristine condition.

Gleaming new vehicles from, VW, Kia, and Nissan needed a sparking backdrop to show them at their best … but the showroom floor was the weak link, as the surface was dull and had lost its shine.

Constant foot traffic, with cars being moved inside and out frequently, meant layers of grime had built up on the showroom surface.

So when CrestClean’s South Canterbury Regional Manager Robert Glenie dropped by the dealership to introduce himself, his timing could not have been better. Rob was accompanied by CrestClean National Sales and Relocation Manager Chris Barker.

The two men found Chris on his hands and knees, cloth in hand, hard at work on the floor.

“The boys walked in and said ‘I think we can help you there!’ It was certainly good timing,” said Chris.

“I was actually cleaning the floor. We had had the tiles cleaned and mopped but unfortunately the floor had a big haze over it.

“I was down on my hands and knees with a cloth trying to polish them.”

After some discussions, a plan was put in place for CrestClean to bring in a floor scrubber to tackle the problematic floor.

Robert said as soon as he saw the floor issue he knew the solution was straight forwarded.

“It was a case of CrestClean to the rescue and we know just what to do.

“Only a week earlier I had run a Module 1 Training course in Ashburton and invited Kerry Boon form Proquip to demonstrate a floor scrubber and buffer.

“Chris Barker and I discussed what Chris and his dealership were looking for and we advised him what we could offer and what would best suit the business.”

A new floor scrubber was ordered and the change was immediate for the dealership boss.

“It’s very impressive. The amount of dirt and rubbish collected by the machine was incredible. I am stoked,” said Chris.

“We’re an award winning dealer so we take a bit of pride in how we look and how things are.”

Chris said having experienced people on the job has made a world of difference to the business.

“It’s going to the next level having professional cleaners come in and clean the place rather than having staff do it.

“In the past we’ve just had people in who have used a mop, and it just tends to move the dirt around, as opposed to picking it up.

“You guys have got that cool machine and it’s made a hell of a difference.

“Having a clean floor is like having a clean plate! At the end of the day it’s the same thing, you are judged by that. It’s a vast expansive area of floor and anything on it shows up straight away.”