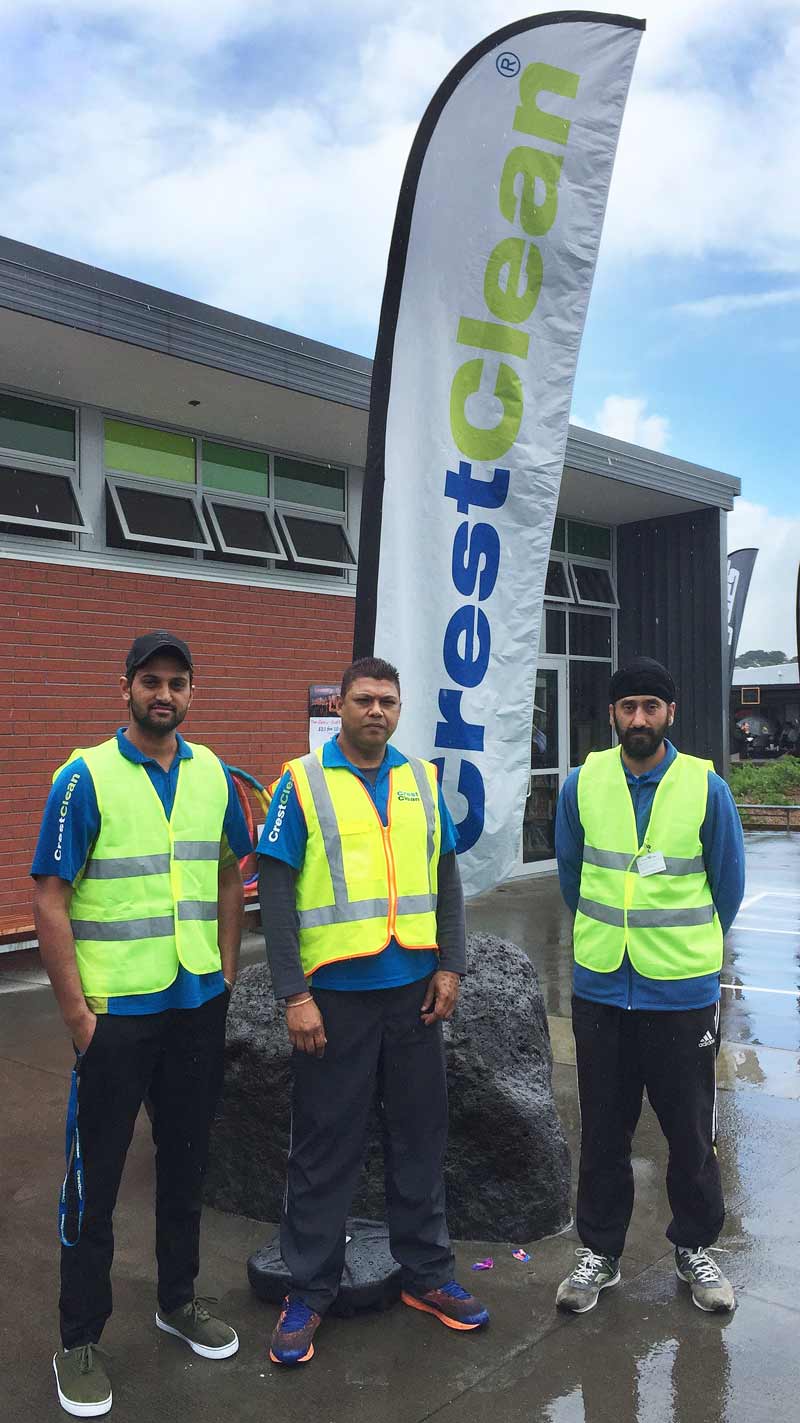 Kind-hearted CrestClean team members happily rose to the occasion when the heavens opened and a school’s community event was lashed by driving rain.

It was a frantic day of constant mopping up and cleaning for franchisee Ram Kumar and his willing workers – but it was also a day that brought his team the satisfaction of playing a big part in helping a stranded hospital worker get to work on time.

Ram and cleaning personnel Simarjeet Singh and Manjinder Singh had offered to come in free of charge to service the toilets throughout the day and help with the tidy up at Auckland’s Stonefields School.

But everything didn’t go quite as expected for the community fair, as the wet weather saw the team rushing around trying to keep floors dry and clean, with foot traffic heavy inside the school as about 1000 people flocked to the event.

Among the crowd was a St John volunteer who had no idea his wife, a hospital worker, had locked herself out of their home and was shortly due to start her shift.

When the man’s wife turned up at the event she asked Ram and his team if they could locate her husband.

“We were approached by a lady who had locked her keys in her house and she was looking for her husband who was working there as a volunteer for St Johns,” said Ram.

“She was trying to call him – but he’d left his cellphone in his car. She had to go to work and she couldn’t find him.

“She gave us a description of him and I said ‘we did see a guy from St John moving around with a collection bucket some time ago’.”

Ram decided to dispatch one of his team help track down the man.

“Simarjeet went to look for this guy and after about 15 minutes of searching he found the guy and we brought him to his wife.

“She was very thankful. She would have not been able to go to work if she hadn’t found her husband. She worked at the hospital and it was important she could get to work.

“Her husband had left his phone in the car because it was so wet and he didn’t realise his wife couldn’t get into the house and was looking for him.”

Ram said his team was kept busy all day. They started at 9.30am and finally finished about 4pm.

“It was a very, very wet day. You can imagine that it got quite messy with people who had got soaked going into the classrooms and using the toilets and showers.

“There was quite a big mess. It was a hectic day. The toilets began to get really messy and we had to go around and clean them every hour, and there are quite a lot toilets around the school!

“With 1000 people at the school using all the facilities it was a challenge for us to keep all those places to clean. I think my team did a really good job.”

Stonefields School caretaker Brian Hessian said the Crest team had done a great job.
“Their contribution to our day was very much appreciated by everyone.”

The community event had raised about $15,000 for the East Auckland school, he said.

“We are glad to assist our long-standing customers, especially schools. Our personnel were only too happy to volunteer their time to help out,” he said.