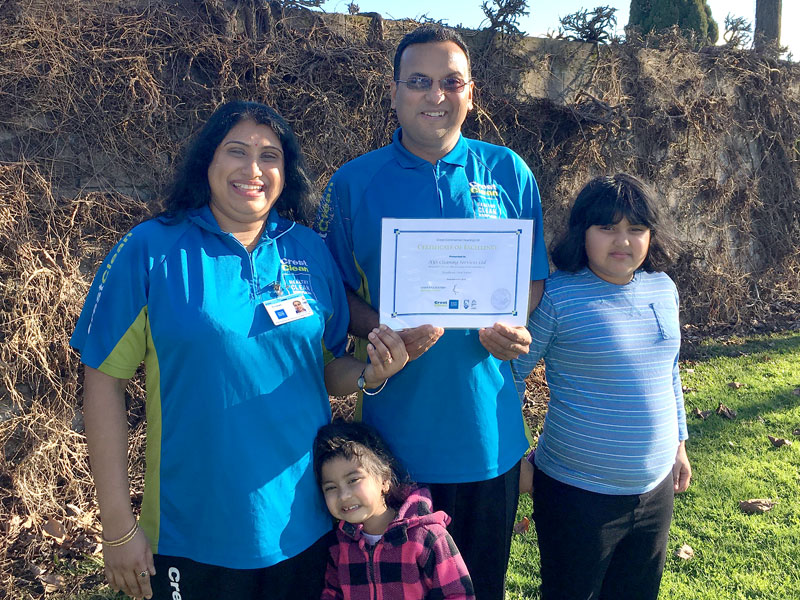 Yogeeta and Amidesh Singh with their children, Yashika, 3, and Amisha, 8.

On the living room wall of Yogeeta and Amidesh Singh’s Auckland home there is a certificate that’s testament to her commitment of gaining a bachelor in education degree.

Alongside the graduation award will soon hang another framed certificate – a Certificate of Excellence from CrestClean. The award is not only a shining accolade to the success of their cleaning business, it’s brought immense personal pride for Amidesh.

“He’s looking to frame the certificate and put it up beside my degree,” says Yogeeta. “This is the very first certificate for Amidesh. Even at school I believe that he didn’t get much appreciation compared with what CrestClean has done for him,” she added.

The Certificate of Excellence recognises the couple’s high standard of cleaning at Woodland Park School.

Julie Griffin, one of CrestClean’s Auckland Quality Assurance Co-ordinators, says Yogeeta and Amidesh have excelled since joining the company in April. “To get a Certificate of Excellence from a school is quite a big thing.”

The couple work hard in every area of their business, she says. “You can see they are proud to own a CrestClean franchise. They keep their equipment spotless and they take a lot of pride in the way they present themselves. They have worked really hard since joining CrestClean.”

Amidesh is originally from Fiji and had run a family dairy farm there with his father. After moving to New Zealand he found work as a commercial cleaner in Auckland, remaining at the same company for 13 years. He later worked for a brief period as a cleaner at Auckland Hospital.

But joining CrestClean fulfilled a strong desire to work for himself, says Yogeeta, who is a preschool teacher.

“I’m really happy for him as he has proved himself with his experience and his knowledge, and our business is doing really well.”

She says they spent several years researching what business to buy – but CrestClean was a standout. “We found that CrestClean is the best cleaning business.”

Buying a cleaning franchise had brought many benefits. “We now have quite a lot more family time and our financial situation has improved as well,” Yogeeta says.

They like how they get paid twice a month for the work they do. “There’s no hassle with the payment from CrestClean. The money comes into our account and everything is so smooth. It’s a wonderful experience with CrestClean.”

For Amidesh, who was already an experienced cleaner, joining CrestClean meant upskilling through the Master Cleaners Training Institute. “You learn such a lot of new things during the training courses,” he says.

“It feels very good being your own boss. With the flexible hours it means I get plenty of time for the family.”

“This new team has exceeded my expectations. They’ve demonstrated great cleaning and superb customer service from day one.”