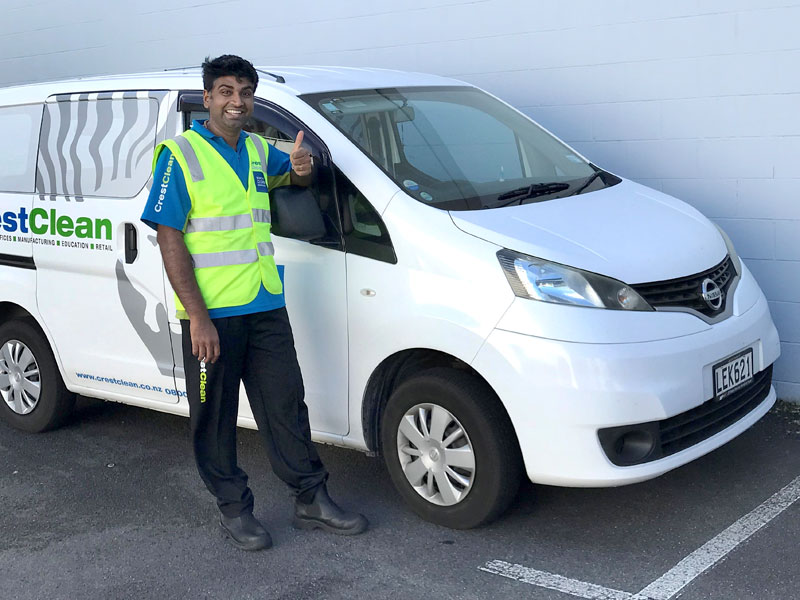 CrestClean business owner Simis James is delighted to be his own boss – but it was a move that took time and patience before the dream became a reality.

Simis, who is originally from India, was introduced to CrestClean by friends who were franchisees. And what he heard about being a small business owner made up his mind that’s what he wanted to do.

But first he had to get his New Zealand residency before he was eligible to go any further. In the interim he carried on with his job at a food processing company in Hamilton.

With his residency approved, Simis contacted CrestClean’s Hamilton Regional Manager Nivitesh Kumar who helped to pave the way for the purchase of a franchise.

It’s been a little over six months since Simis and his wife Soumya Simis purchased their business. They are delighted to be part of CrestClean, she says.

“Simis had a plan when we came to New Zealand and we heard about CrestClean. But at the time we were not New Zealand residents.

“It’s been his long-time dream and we are really happy how well it’s all worked out.”

The move has meant the couple have lots more time together. Previously Simis was working long hours. “He was working for the whole day, with early morning starts and finishing late evening. It meant we would hardly see each other.”

Soumya, who works as a nurse specialist at Hamilton Hospital, says since having their own business their life has been transformed. “It’s now really good for us as we can spend more time with each other during the week.”

And Simis loves the new routine he gets from having his own business. “I like the flexibility of being my own boss. The work is not too hard and it’s a good environment to be working in.”

The couple are looking to build a solid future with CrestClean. “I think we’ll expand the business when we can,” says Soumya. “Once we can save some more money we’ll look to increase the size of our business.”

Nivitesh says Simis is totally focused on doing a great job. “He takes pride in his work and is conscientious.

“He’s out there with a smile and is so keen to keep his customers happy. He wants to deliver the best service he can.”