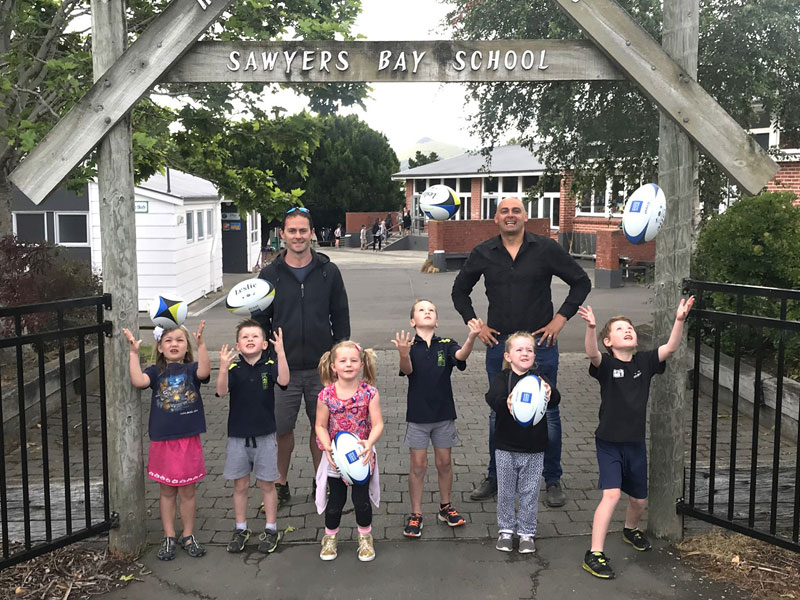 Kids were just itching to grab a piece of the action when a prize of six rugby balls arrived at their school.

Principal Gareth Swete found plenty of young hands willing to try out the balls he won in a promotion to celebrate the success of Crest PropertyCare – CrestClean’s new caretaking service for schools.

The sports prize will make a big difference for pupils at Dunedin’s Sawyers Bay School, says Gareth, who was delighted to receive the LeslieRugby balls.

“They are high quality rugby balls, which is awesome. We’ve got a pretty active bunch of kids here. Any excuse to be running around with a flash bit of new gear is always appreciated. A lot of our children participate in rugby outside of school and we run our own school touch teams.”

Gareth was certain the balls would be put to good use. “We’ll put a couple aside for our senior touch teams and the other balls we’ll be putting into classrooms for lunchtime and playtime use.
“They won’t be hidden away in a PE shed – they will be used often.”

CrestClean’s Tony Kramers dropped off rugby balls at Sawyers Bay School. He said: “Crest provides cleaning services to 430 schools throughout New Zealand and it’s always nice to give something back and support the community.”