Shining examples of our Move to the Regions Programme 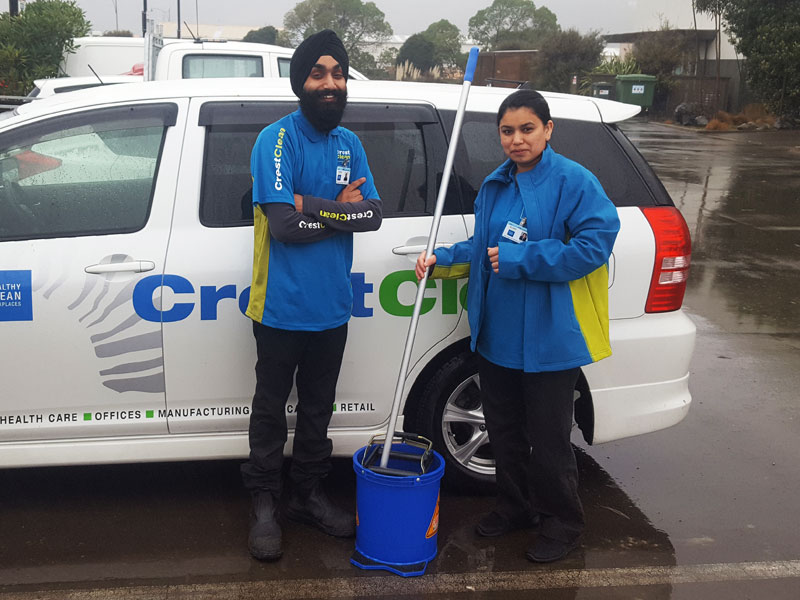 Rain or shine, Hardeep Singh and Navdeep Kaur get the job done!

When he heard about the opportunities Crest was offering, Hardeep Singh didn’t have to think twice.

As a grocery manager at a Wellington Countdown store, Hardeep had a vision that one day he’d be working for himself and owning his own business.

By chance he discovered his dream could be realised sooner than he thought by purchasing a Crest franchise.

“I heard from some friends that this was a really good opportunity to buy a business,” he said.

Two months ago Hardeep and his wife Navdeep Kaur, who was working as a deli supervisor at another Countdown store in Wellington, took the plunge. They jumped at the opportunity to join

CrestClean as part of the Move to the Regions Programme, which pays relocation costs to help people move from the country’s main cities to areas where franchisees are needed.

The couple relocated to the Kapiti Coast and have settled in the coastal community of Raumati.

And they couldn’t be happier. “I felt Wellington was too crowded and it was very windy,” said Hardeep.

“Now we are close to the sea and it’s really great. I love walking along the beach.”

Hardeep, who moved to New Zealand seven years ago from India, loves being a small business owner and the many advantages it brings.

“It’s great, and I like the ability to have flexibility. It gives you freedom with the hours you work,” he added.

And the couple have already made a big impression with their work ethic, according to Philip Wilson, CrestClean’s Wellington Quality Assurance Co-ordinator and Kapiti Coast Regional Manager Brad Farrier.

“Right from the beginning, it was clear that they were very good cleaners and have excellent communication skills.

“Whatever they do, they do it with the goal of making their customers happy. They are a delight to work with and have a bright future with Crest.”

The couple not only received a $3000 incentive as part of the Move to the Regions Programme, they received a free CrestClearn start-up kit containing cleaning products and materials.

“They are really good with their communications. I’m really happy. We had some really good training and we are appreciative of what the trainer did for us.”

CrestClean National Relocation Manager Chris Barker said the Move to the Regions Programme continues to grow from strength to strength.

“It’s been a big success and continues to be so for us, especially for people in Auckland who are struggling to make ends meet.

“The cost of living there is high and time spent in traffic takes up a lot of their time with very little return for them.

“Moving to the regions they find reduced costs of living and a lot of opportunity to make more money.”