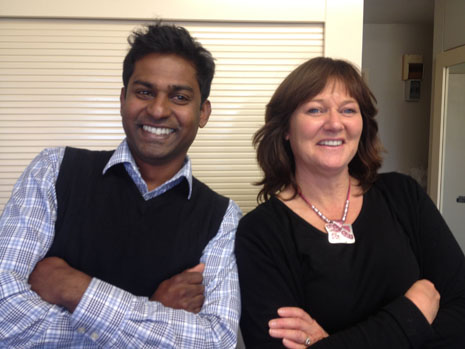 Kiri James and Yasa Panagoda go way back — both are now Regional Managers for CrestClean.

CrestClean is pleased to announce a new Regional Manager for Christchurch South, Kiri James, has joined the team.

Born and bred in Christchurch, Kiri brings years of sales, management and commercial cleaning experience to CrestClean. She was previously Kimberly-Clark’s Regional Sales Manager for the South Island and, prior to that, she was in sales and marketing management at Deep South Ice Cream. She also had six years in the service industry with a large global organisation. Four years of this was spent in a Business Development position gaining commercial cleaning experience.

Her move to CrestClean is something of a reunion for Kiri, who found out about the position from an old mate – Yasa Panagoda, CrestClean’s Regional Director for Christchurch North.

“I used to work with Yasa,” she says. “We’ve known each other for years and just kept in touch. He would always tell me what a great place it was at CrestClean.”

CrestClean’s reputation and opportunities for growth were another big draw for Kiri.

“Crest has a really good name and the people involved are all business owners, so they’re not just turning up to work – they’re looking after their own businesses,” she says.

As for the potential for Christchurch South, she adds, “There should be massive opportunity because of the rebuild. I intend to grab hold of it.”

And, she adds, “It will be awesome working alongside Yasa again!”