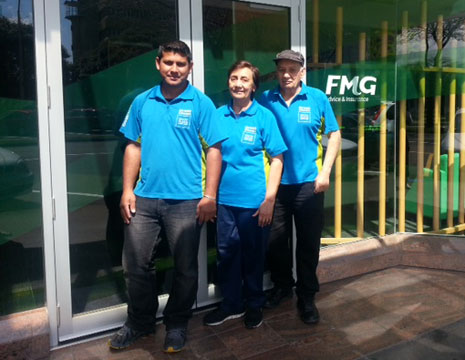 FMG is a nationwide insurance provider and CrestClean works in many of their locations across the country. Medina and William Pinto and Ronald Asre work together to keep the 11-story FMG office building in Palmerston North looking spick and span.

Medina and William originally hail from Zimbabwe and have been with CrestClean for two years. Steve says “they really put 100% into their work, they are great ambassadors for CrestClean.”

The hardworking couple moved to New Zealand in 2011 in search of more opportunities and a better lifestyle. They are living in Feilding and enjoy traveling to and from work. “We want to see more of New Zealand so we enjoy all the travelling,” they say.

Although they’ve had to get used to the cold New Zealand winters, William says that they love it here. “We love the people- everyone is very friendly,” he says.

They decided to join CrestClean in January 2012 after working in engineering and accounts in Zimbabwe. William says they are really enjoying their work, “We love the night-time hours as we can relax during the day,” he says, “Also, the CrestClean system allows us to work at our own pace- which is great for us.”

They are enjoying the quiet town of Feilding but are planning a trip to Taupo in 2014 to take a well-deserved holiday with their family. While they’re away, Ronald has kindly offered to help look after their areas of the FMG building. “We all work as one big team in Palmerston North,” William says, “Ronald and Steve are always willing to help us out if we need.”

Ronald has been with CrestClean for over two years and according to Steve, “Is fantastic at cleaning- especially hard floor strip and polish work.”

Ronald is originally from Fiji and moved to New Zealand to provide a better lifestyle for his family. He says that living in New Zealand is great, “The houses are warmer and the roads are in much better condition,” he says.

“In New Zealand, Health and Safety comes first. You get a lot of support from ACC and safety training here- I didn’t get that working in Fiji,” he says, “Supporting my family was a lot harder in Fiji as you don’t earn much money over there- but here it’s much better.”

Ronald decided to join CrestClean because he wanted to have his own business and really admired the CrestClean system. “The training provided and the encouragement to continue training is so helpful to growing a successful business,” he says,  “CrestClean isn’t like other cleaning companies who just sell you a franchise and then sit back and take their cut after you’ve been paid- they really get involved.

I love working with CrestClean, especially because we have such a supportive Regional Director in Palmerston North. Steve is great- he’s always willing to help all of us. He looks after us as a whole team.”

Ronald plans to grow his CrestClean franchise and eventually purchase a home in New Zealand for him and his family.

Steve is happy with the way things are going at the FMG office in Palmerston North, “Medina, William and Ronald are doing a great job of working together to keep the office looking great. They are doing a fantastic job,” he says.