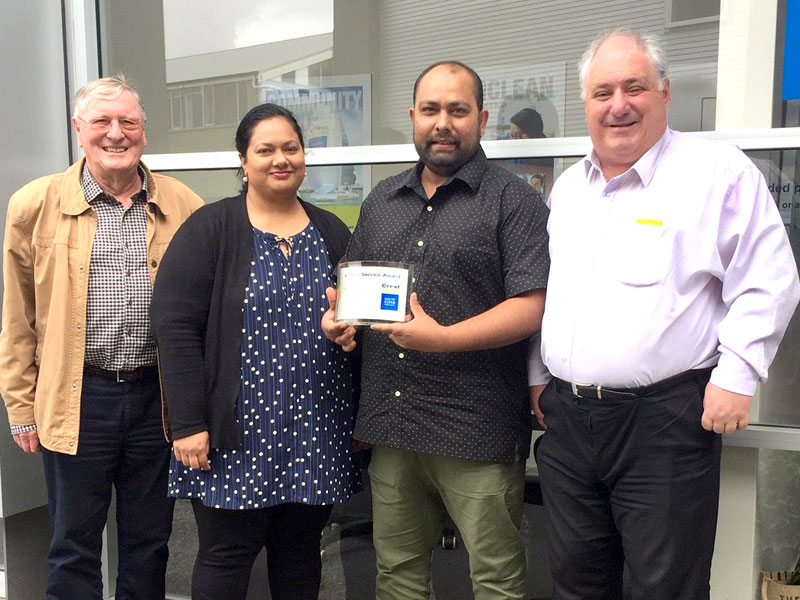 Fiza Rahiman with his 10-year award. With him are his wife Nazia, CrestClean’s chairman of directors Marty Perkinson, and Dries Mangnus, CrestClean’s Auckland Central Regional Manager.

He’s a talented and well respected colleague who loves to give back to others.

As Fiza Rahiman clocked up 10 years’ service with CrestClean, it was his Regional Manager who summed up the standout qualities he admires in the successful Auckland business owner.

“He’s hardworking, dependable and just a genuine all-round good guy,” said Dries Mangnus, CrestClean’s Auckland Central Regional Manager. “He has great relationships with his customers, many of whom he’s looked after for many years.

“Fiza understands the business and is very passionate about CrestClean and the positive impact it’s had on himself, his family and his life.”

Fiza says he can hardly believe how quickly the past 10 years have gone. With a background in retail, he joined CrestClean in 2008 and thrived on the change of direction and lifestyle benefits that came with being a franchisee. He had a regular income and was able to enjoy more family time.

But not everyone supported his change of career. At the time his friends laughed at him when he told them he’d bought a cleaning franchise.

Fiza remembers the cruel jibes. “They told me that being a cleaner was probably the lowest job you could get,” he says.

But he proved them wrong, with his business quickly going from strength to strength as he took on more work and increased his turnover.

He reached a professional milestone earlier this year when his experience was officially recognised by the Master Cleaners Training Institute, which appointed Fiza as a CrestClean Regional Trainer for Auckland.

It’s a role that brings him a sense of fulfilment in helping other CrestClean business owners, who are at the beginning of their career. “It’s rewarding to share the knowledge I have with others,” says Fiza, who is also a hard floor care trainer. “It gives me a lot of satisfaction.”

Fiza says buying a CrestClean business has been life changing. “Everything I’ve got is because of CrestClean. It’s given me opportunities and most importantly it’s given me family time and a good lifestyle.”

As for the future, Fiza says he would like to be more involved in training. But for the time being he’s looking forward to a well-earned break to mark his 10-year anniversary. The $2,500 bonus he received from CrestClean will go towards a family holiday to the Gold Coast.